Basketball: Northerners stage late comeback, but Dubliners get crucial scores at the death 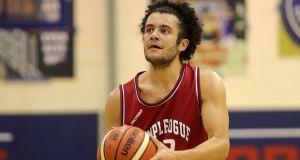 Templeogue lead the way at the top of the Men’s Super League after a thrilling 81-83 point victory over Belfast Star on Sunday afternoon.

It was Star’s second game of the weekend having overcome Pyrobel Killester in nail-biting (92-88) fashion on Saturday evening as part of an action-packed two days of top of the table action. Sunday’s game saw them stage a late comeback against the Dubliners to see the game in the melting pot right up until the final buzzer, with Neil Randolph and Stephen James getting some crucial scores at the death for Templeogue to send them home to victory. Templeogue’s American, Dee Proby, was also one of the standouts on the day, finishing the clash with 21 points. Speaking afterwards, Templeogue head coach Mark Keenan said: “It was such an intense battle. We had a 10-point lead but Star fought until the end and I’m just relieved that we came out on the right side.”

Elsewhere, it was derby weekend around the remainder of the Men’s Super League with C and S Neptune getting the big result of the weekend, edging UCC Demons 88-91 in a hotly-contested clash at the Mardyke Arena. Neptune boss Paul Kelleher reflected, “This is a fixture that Cork basketball and the Men’s Super League needs and it’s good to see people coming out and giving us the support we need on a Friday night.”

Garvey’s Tralee Warriors, meanwhile, came out 68-77 point victors over local rivals Keane’s SuperValu Killorglin in a big Kerry derby that truly lived up to its billing. Tralee’s Jordan Evans top-scored with 18 points in an excellent all-round performance. Maree gained bragging rights in the second Galway derby of the season, running out 86-79 victors over Moycullen in Calasanctius on Saturday thanks to a 31-point display from American Sean Sellers. The last derby of the weekend saw DCU Saints run out 76-71 point winners over UCD Marian, with Kevin O’Hanlon having a standout game for DCU, scoring 21 points as the northsiders weathered the storm of their southside counterparts.

Over in the Women’s Super League, Courtyard Liffey Celtics got 2019 off to a bang as they maintained their unbeaten run with a 65-73 win over Maxol WIT Wildcats. Allie LeClaire led the scoring for Celtics with 28 points in an extremely close affair, with the visitors just managing to stretch the lead out in the fourth. DCU Mercy also continued their impressive winning streak, defeating IT Carlow Basketball 39-65 on the road on Saturday to keep the pressure on Liffey Celtics at the top of the table. Sarah Woods top-scored for the Dubliners with 19 points as they controlled the game from start to finish. NUIG Mystics’ woes continued this week as they lost out to Fr Mathews at home, 51-68. Sisters Niamh and Gráinne Dwyer contributed 30 points between them for the visitors to see them home to victory.

Indeed, it was wins all round for the Cork teams, as a 21-point display from Áine McKenna helped Ambassador UCC Glanmire home to a 58-79 point victory over Marble City Hawks on the road, while Singleton SuperValu Brunell defeated Pyrobel Killester 72-66 in a fast-paced and competitive game at the Parochial Hall on Sunday, Linda Rubene top-scoring the hosts home to victory.

In the Men’s Division One, meanwhile, the big upset of the weekend saw Tradehouse Central Ballincollig suffer their first defeat of the season when they lost out 85-96 at home to KUBS in the first cross-conference game of the season. A whopping 44 points from Elijah Tillman for KUBS proved the difference on the night.