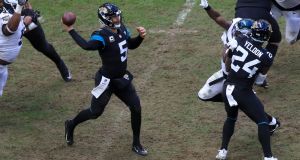 In a weekend which began with four Jaguars players being detained outside a London nightclub, a 24-18 loss to the Eagles at Wembley Stadium on Sunday might have marked the season’s unofficial end for Jacksonville, who entered 2018 with Super Bowl aspirations.

Coming into this season, the Jaguars were riding the energy of the franchise’s first AFC Championship appearance in 18 years and the words of outspoken star cornerback Jalen Ramsey, who criticised just about every quarterback in the league in a GQ profile published in August.

Ramsey’s silence at the microphone after a 40-7 loss to the Dallas Cowboys in week six was perhaps the first sign - aside from the defence leaking 40 points - that the Jaguars’ 2017 success might not be replicated this season.

After finishing second in the NFL in takeaways and total yards against in 2017, the star-studded defensive unit has been showing its cracks in 2018, and proving that not even its speed and skill can make up for the uninspired quarterback play of Blake Bortles, who currently ranks 26th among starting quarterbacks in passer rating and 27th in completion percentage.

Bortles was benched after fumbling twice during week seven’s 20-7 loss against the division-rival Houston Texans, which moved the Jaguars to 3-4, a game behind the Texans for the AFC South lead.

A crowded AFC playoff picture and three consecutive losses set the stage for the Jaguars’ biggest match of the season against the defending Super Bowl champion Philadelphia Eagles in London.

The match was close throughout, but Doug Pederson’s dynamic Eagles attack led by quarterback Carson Wentz proved too much for Jacksonville, who mustered only one offensive touchdown on the afternoon and 18 total rushing yards from its running back committee of Carlos Hyde and T.J. Yeldon.

Jacksonville kicked a field goal on the ensuing drive and forced an Eagles punt on the next Philadelphia possession, but again, Bortles failed under pressure, unable to convert a first down on three consecutive incomplete passes from the Jacksonville 48.

A 13-yard catch by Philadelphia wide receiver Jordan Matthews on the next drive forced the Jaguars to use their final timeout before the two-minute warning, allowing Wentz to ice the game with three kneels.

In their second year under the executive leadership of three-time Super Bowl-winning coach Tom Coughlin, the Jaguars are now tied for last in the AFC South at 3-5, two games behind a Houston Texans team with a resurgent defence and talented attack led by second-year quarterback Deshaun Watson and star wide receiver, DeAndre Hopkins.

With a bye week upcoming, the Jaguars will look to right the ship for a matchup with the Indianapolis Colts in week 10, where a fifth consecutive loss will all but guarantee their absence from the 2018 play-offs.

An 18-point, second-half Buccaneers comeback led by second-string quarterback Ryan Fitzpatrick fell just short against the Bengals, whose kicker Randy Bullock came off the bench for his first field goal attempt of the afternoon to hit a 44-yard, match-winning kick with time expiring.

In one of the strangest receptions in NFL history, a pass from Dolphins quarterback Brock Osweiler intended for wide receiver Jakeem Grant floated 10 yards downfield after being deflected during a hard tackle by a Texans defender. Wide receiver DeVante Parker secured the floating football, giving the Dolphins a crucial third-down conversion with the team trailing 28-17 in the third quarter.

A battle between the NFC’s best teams awaits in week nine, as Sean McVay’s undefeated Rams (8-0) squad travels to New Orleans to take on Drew Brees and the NFC South-leading Saints (6-1).