Taylor in top form as she dominates a durable Gutierrez 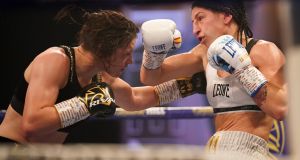 In one of her most dominant moods, Katie Taylor flashed and stung her way to a 17th professional victory, her schooling of Spain’s Miriam Gutierrez again convincing many that there are only a handful of boxers in Taylor’s league in the lightweight division.

Brave Gutierrez was not one of them. The 37-year-old barely survived going the full 10 rounds as Taylor pushed her into the ropes from the first bell and rarely took a step back. The referee took a few close looks and at one stage mid-fight might have stopped the contest, Gutierrez also hitting the canvas at the end of the fourth round.

“I’m very, very satisfied – I thought it was a great performance,” said Taylor. Nobody was about to counter that point of view after the up-tempo romp home.

“She was very, very tough. I was definitely trying my best to get her out of there at times, but she just kept firing back. She was very durable. She’s obviously bigger and stronger than I was. I saw I hurt her in the first 30 seconds, and thought I might get her out in the first round. But how wrong I was.”

The scoring reflected what was a Katie Taylor show with the three referees marking the fight 100-89, 100-90, 99-91 making it unanimous and with Gutierrez winning just one round on one card, a generous viewing of the bout at that.

The Spaniard at the end paid her own homage with hands clasped and a respectful bow as Taylor held her four belts in the ring to an almost empty Wembley Arena. Taylor’s only regret of the night was that the fight was not stopped. Gutierrez, bigger and stronger, weathered as much as Taylor rained down.

From the opening blizzard that pushed her into the ropes to the steady stream of combinations, Gutierrez absorbed it all and although she was saved by the bell in the fourth after a Taylor right hand, she recovered to show real durability.

Working her body as well as looking for the clean winner in the fifth as Taylor sniffed weakness, a left hook in the sixth still wasn’t enough. From there the 37-year-old Gutierrez found slightly better poise as Taylor relentlessly chipped away.

Remaining in control, with her opponent unable to land, Taylor’s distance control and speed were never in doubt. Gutierrez in the end will surely take pride in going the 10 rounds against a boxer she had openly admired before the contest.

“Unfortunately I just couldn’t get her out. I would have loved to have gotten the stoppage today, but overall, it was a great performance,” said Taylor. “I never go into any fight complacent. She was actually very heavy-handed – she could punch – and when you go in complacent against those kinds of girls that’s when you actually get beaten. So I was very, very happy today.”

As a former amateur boxer Gutierrez more than many of the other professionals or MMA crossovers in women’s boxing understood the magnitude of the task with Taylor’s professional pre-eminence underpinned with five successive amateur world championships and an Olympic gold medal.

Thoughts now turn to who the next face will be with MMA’s Cris Cyborg name-checked during the week.

Puerto Rican American Amanda Serrano is always in the picture but now part of a repetitive narrative of angry words and disagreement, and Jessica McCaskill, the undisputed welterweight champion, regularly touted as future opponents.

“Cyborg can fight, she can box, she is heavy-handed,” said Taylor’s promoter Eddie Hearn to Sky, warning any meeting would take place in a ring not a cage. “But she is heavy and that is an issue.”

Taylor, who was 34 in July, won’t get carried away with the ease of the win as Saturday was a housekeeping exercise more than a challenge to her top-dog position. Gutierrez was a mandatory challenger for Taylor’s WBA, WBC, WBO, IBF and Ring Magazine belts, and would have been seen as a safe fight to get over.

Among all of the names mentioned after beating Delphine Persoon in the second of their two meetings Guterriez name was not among them. Taylor will be faced with regular mandatory challengers if she wishes to keep all four of her belts.

With Gutierrez efficiently taken out of the queue, the noise around Taylor has somewhat calmed. Not a bad way for the Bray boxer to look towards a new year, comfortably the undisputed lightweight champion of the world.