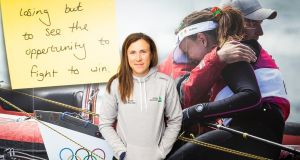 With the new Irish Sailing Performance HQ up and running in Dún Laoghaire, competition attention will be to the fore next week when the annual Princess Sofia Regatta for Olympic classes gets underway in Mallorca.

The launch of the new facility that will serve as a permanent training base close to home also offers the possibility of moving the shipping containers that comprise gym, workshop and coaching centre to major event venues such as Tokyo 2020.

But first, Ireland must qualify for any or all of the four competitions in the Olympic Regatta.

Including independent campaigns, Ireland will have eight boats competing off Palma yet Dublin Bay may still be busy as only the men’s crews are abroad; by chance, exam schedules mean that Irish Laser Radial sailors are not attending.

The “PHQ” facility also includes a floating pontoon dock for storing and launching boats and coaching RIBs on the Commissioners of Irish Lights campus.

“We mightn’t see a difference short-term but I genuinely believe that this is the start of the next phase,” Irish Sailing Association’s performance director James O’Callaghan told the Irish Times. “The HQ enables you improve every day at home rather than at training camps abroad.”

Also, the programme aims to host training camps in Ireland and welcome partners from abroad to Dún Laoghaire rather than joining other national programmes overseas.

So, what is there to expect of the squad for the coming week?

Undoubtedly, all eyes will be on Finn Lynch in the Laser Standard, the Carlow single-hander who was the youngest athlete in this event when he made his debut at Rio 2016.

While the Palma regatta is usually the first competitive event of the season for many sailors, Lynch is buoyed by a successful showing at the Miami Olympic Classes Regatta last month when he finished in the top 10 of his event.

The Princess Sofia is the first of two trial events in the Laser to determine which Irish sailor will attend the Tokyo test event in August.

Also hunting for the place will be Liam Glynn and Ewan McMahon, so a strong start to the week for any or all of the three will set in motion a highly competitive mini-series over the next while, leading into the Genoa Olympic classes event at Easter when all Irish boats will be in action.

The 49er skiff class will also be sailing next week for their first regatta of the season.

“We usually expect a bit of rustiness as they’ve been working on boat-handling (during the winter),” predicted O’Callaghan.

“Hopefully we’ll be seeing some good individual race performances but I wouldn’t be surprised if we see a lack of consistency as they’re mostly a young squad or new partnerships.”

A strong start for two-time Olympian Ryan Seaton, now paired with Seafra Guilfoyle, would probably see a good chance of a strong finish given the veteran’s experience as a past winner of this regatta sailing with Matt McGovern.

Under 23 world champions Robert Dickson and Sean Waddilove are already in Mallorca but Sean is carrying a training injury and may be doubtful, so former training partner Robbie Gilmore is currently sailing and on stand-by to compete next week.

Training partners in the skiff group Tadgh and Sean Donnelly will also be racing and are aiming for full team status at the Europeans in May in the build-up to the next Olympic qualification opportunity at the world championships in New Zealand at the end of November.

“If the sailors don’t qualify this year, we (still) need to know that they can compete at the Genoa venue because that will be the final qualification venue for Tokyo,” said O’Callaghan. “But there isn’t a lot of runway left for qualification.”

Meanwhile Olympic silver medallist Annalise Murphy, in her new class the 49erFX skiff, is paired with Katie Tingle and are an unknown quantity in competition. Their debut will be in Genoa, which will be a bellwether event.

“We’re all curious too – Annalise has a great work ethic and since Katie returned (from injury) she’s been a bright light within the training camp,” said O’Callaghan. “We’re not placing huge expectations from their first event – but will inform a lot of the rest of their programme.”

For any doubters about the narrow window of opportunity, refer to the six-month lead-up to the Rio Games when Murphy placed at the back of almost every event and appeared to have lost her mojo.

And then went out and won the opening race of the Olympics and loved every minute of it all the way to the podium.