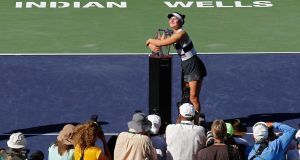 Bianca Andreescu of Canada hugs the trophy after beating Angelique Kerber of Germany in the final of the BNP Paribas Open at Indian Wells in California. Photograph: Larry W Smith/EPA

“It’s crazy to think that it became a reality today,” she said after the roars had faded Sunday afternoon in Indian Wells.

Not so crazy if you observed all the shots and grit that Andreescu had to summon under duress to defeat tennis elder after tennis elder in the desert and win one of the most prestigious titles in the sport.

But it was certainly far-fetched when you considered her lack of experience at this level and the quality of the players she had to outwit and outhit, including three-time Grand Slam champion and former world No 1 Angelique Kerber, 6-4, 3-6, 6-4, in Sunday’s final .

Andreescu, 18, is the first wild card to win the BNP Paribas Open.

“Hopefully, this moment can be a great inspiration for many young athletes because, like I always say, if you believe in yourself, anything is possible,” Andreescu said during the award ceremony.

Kerber, 31 and seeded eighth, was unable to prevail against Andreescu despite a huge edge in experience. This was Kerber’s 29th final on tour, and only Andreescu’s second. Kerber had won more than $27 million in career prize money; Andreescu had won just $350,000.

Kerber also had an apparent physical edge in the final phase of a gruelling match, played in soaring temperatures. Andreescu arrived on court with her right shoulder and right forearm taped after winning six matches en route to the final.

“My shoulder has just been really, really tight,” she said. “That was more for prevention.”

Still, she required more treatment on her arm early in the third set, but despite looking bone weary between points, crouching down and stretching repeatedly, she found the will and, above all, the patterns and talent to finish off Kerber on her fourth match point.

When it was over, Kerber kissed the teenager on both cheeks. Andreescu then crossed to the opposite side of the net, kissed the blue court and rolled onto her back, her arms and legs splayed as she basked in the sun and in one of the game’s most unexpected great performances.

Though most Canadians at home could not watch the match on terrestrial television – only streaming was available outside of Quebec – her compatriots definitely noticed.

Women’s tennis, which is in a deeply compelling phase, has had a number of breakthrough performances of late, including Naomi Osaka’s run to the title at Indian Wells a year ago as an unseeded player, when she was 20. That presaged Osaka’s victories at the US Open and the Australian Open and her rise to No 1, where she remains.

Andreescu was asked if she saw that as inspiration.

“No pressure,” she answered quickly, smiling.

“It’s totally fine,” Andreescu said. “Yeah, it’s definitely inspiration seeing her claim the trophy last year, and winning two Grand Slams right after that has been amazing to see. But I don’t really want to focus on the future right now. I just want to enjoy this moment, because I don’t want to take anything for granted. You never know what next week brings. I just want to savour this.”

Next week will bring the Miami Open, where she has a first-round match scheduled against Irina-Camelia Begu of Romania, the player she had to rally to defeat in the first round in three sets at Indian Wells.

“She’s not seeded and won’t get the extra day of rest,” her coach, Sylvain Bruneau, said. “So of course it’s a challenge to go right to Miami with very little rest and with the emotions and everything. But it’s like that, and you have to go with it. It’s the learning curve and the job.”

Andreescu, the only child of Romanian immigrants, is the youngest woman to win at Indian Wells since 17-year-old Serena Williams did so in 1999.

“You just played amazing the whole tournament, so you really deserved to win the title here,” Kerber told Andreescu in her post-match remarks.

Andreescu did not emerge from obscurity. She was a highly regarded junior player who won the prestigious Les Petits As title in France and though she was not the dominant junior at the Grand Slam level in 2016 and 2017, she did win two Grand Slam girls doubles titles.

In January, she upset Caroline Wozniacki, then No 3 in the world, and Venus Williams to reach the final of the tour event in Auckland, New Zealand, and then qualified for the Australian Open, where she won her first Grand Slam singles match.

But her run in the California desert was still a huge leap, and the element of surprise certainly worked in her favour. The last six of her seven matches were against players she had never faced on tour: Dominika Cibulkova, Stefanie Voegele, Wang Qiang, Garbiñe Muguruza, Elina Svitolina and Kerber.

The tour’s veterans will now have a better idea of what to expect, but it will not be easy to identify areas of weakness. Andreescu has a remarkably complete game for a player of any age, much less an 18-year-old. Despite struggling physically at times against Svitolina in their semi-final and again versus Kerber, Andreescu was still able to display her full palette of all-court skills.

“I think she has a tennis that is really complete, and on the mental side, she’s a warrior,” said Bruneau, who helped her on the mental side with some well-chosen words on coaching visits in the second and third sets on Sunday.

Andreescu can bang groundstrokes at a world-class clip or change pace abruptly with slice. She also can hit rolling, off-speed, angled winners from either wing that might well become her trademark. Time and again, she kept Kerber, a counter-puncher who thrives on consistent pace, from settling into a rhythm.

Andreescu can attack the net or defend in the corners with her foot speed and excellent footwork. She has a strong first serve and, perhaps more important in the return-focused women’s game, a solid second serve that is difficult to attack.

Andreescu also likes the drop shot, which can be a joy and a curse – as was evident against Kerber. Andreescu hit some exquisite winners and some tight, untimely errors with the risky shot. But after failing to convert three match points on her serve at 5-3 in the third set, she roared back after the changeover to break Kerber’s serve for the victory. Ranked No 60 before the tournament began, Andreescu will move up to 24th. She also has more than quadrupled her career prize money, earning $1,354,010 for her victory.

Not bad considering that she still does not have a high-school degree, which she is trying to complete online. “I’m on that, but it’s hard because after practice that’s the last thing I want to do,” she said. “I’m just so tired, but I believe knowledge is power.” – New York Times