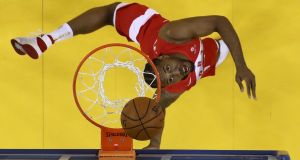 The new NBA season begins on Wednesday (1am, Sky Sports Arena) as the Toronto Raptors launch their title defence in the opening game against the New Orleans Pelicans. It is followed by an intriguing opening game between two of the title favourites, when the Los Angeles Lakers and Los Angeles Clippers meet at the Staples Center (3.30am, Sky Sports Arena). Here are six things to look out for ahead of the regular season.

The battle for LA

After a few years in the doldrums, “Showtime” could be back for the Los Angeles Lakers in 2019-20 season as the NBA’s most famous team have given LeBron James a world-class partner in crime in the form of Anthony Davis, who signed from New Orleans Pelicans.

Davis has been one of the most efficient scorers in the league for many years in an average team and, at 26, is hungry and at the peak of his powers. With the playmaking ability of James alongside him, the Lakers should be formidable this season, especially if other new signings like Danny Green and Dwight Howard can adequately cover their weaknesses.

Yet the LA Lakers are still behind their city rivals the Los Angeles Clippers in the betting for the title after the Clippers managed to nab the best player from last season, Kawhi Leonard, from the Toronto Raptors in the off-season.

Leonard managed to convince Paul George to join him from Oklahoma City Thunder, meaning the Clippers now have two of the best all-round players in the league to go with an already strong roster that won two games against the Warriors in the playoffs last year.

Watching two teams from the same city vie for supremacy will be one of the most interesting stories of the season, with their first battle coming on the opening night.

Warriors on the wane?

Since 2015, the Golden State Warriors have been the dominant team in the NBA, making five straight NBA finals and winning three of them. The Warriors looked to be heading towards another title last year before they were ultimately derailed by serious injuries to key players Klay Thompson and Kevin Durant and gave up their title to the Toronto Raptors.

With Durant’s exit to join the Brooklyn Nets this summer, it felt like the end of an era for the NBA’s most recent superteam. It was always going to be hard to keep Durant and Steph Curry, two of the best players in the league, happy forever and the Warriors never truly felt like Durant’s team despite winning two NBA Championships. Thompson ruptured his cruciate ligament in the finals last year so will be out until at least the playoffs, which leaves a massive load on Curry and forward Draymond Green in the regular season.

The Warriors have brought in exciting young guard DeAngelo Russell from Brooklyn to help replicate the scoring prowess of Thompson and Durant, but it is unlikely to be enough. The Warriors will also have to deal with playing in a new stadium after the move from Oakland to The Chase Center Arena in San Francisco. Only sixth favourites for the title, Steve Kerr’s team will have to prove people wrong if they are to make the finals for the sixth consecutive year.

As well as Leonard-George at the Clippers and James-Davis at the Lakers, a number of other dynamic duos have sprung up across the league. Point guard Kyrie Irving has joined Durant at the Nets, although it is unlikely we will see both play together this season due to Durant’s long-term injury. The Houston Rockets have swapped Chris Paul for Russell Westbrook at point guard, which means the Rockets now have the 2017 (Westbrook) and 2018 MVPs. The Rockets will have a devastating offence if it clicks, but for it to work one of the players will need to relinquish some control: both players like to dominate the ball and aren’t an obvious combination.

The Philadelphia 76ers enter another year of “The Process” and in Joel Embiid and Ben Simmons they have two stars that aren’t rookies anymore and are ready to make the step up. The 76ers were a clutch buzzer-beating shot from Kawhi Leonard away from bringing the eventual champions Toronto Raptors to overtime in Game 7. Seven-foot Cameroonian Joel Embiid is entering his prime as a defensive stalwart, while Simmons has the ability to be Magic Johnson-like at his best if he can improve his jump shot.

This is one of the most open NBA seasons in recent history, which gives the opportunity for a developing team to emerge from the pack. The Raptors are unlikely to defend their title without Kawhi Leonard, but still have a strong defensive team with the likes of Marc Gasol and Serge Ibaka, while Pascal Siakam should continue to improve after a new four-year contract.

The Milwaukee Bucks have the reigning MVP in the “Greek Freak” Giannis Antetokounmpo and a strong team supporting the star that won the most games in the Eastern Conference last season. The Denver Nuggets should improve with a team built around their creative centre Nikola Jokic. The Utah Jazz have recruited well with Mike Conley and Bojan Bogdanovic among those to join the exciting Donovan Mitchell and defensive player of the year Rudy Gobert. Meanwhile the Portland Trail Blazers made the Western Conference finals last year and have top-class guards in Damian Lillard and CJ McCollum.

The number one pick in the NBA draft is no guarantee of future success, especially in an ultra-competitive league. But there are not too many concerns about this year’s top pick failing to make the grade. Zion Williamson is the most anticipated top draft pick since LeBron James in 2003 and is expected to take the league by storm when he makes his NBA debut for the New Orleans Pelicans.

Unfortunately the 19-year-old was forced to undergo surgery on Monday to repair a torn meniscus in his right knee and is expected to miss six to eight weeks, denying fans the chance to watch him from the get-go. But when he does arrive, he is expected to provide many highlight moments with his slam dunks and eye-catching offensive game.

Described by Kevin Durant as a “once-in-a-generation type athlete”, Williamson was named ACC Player of the Year, Athlete of the Year and Rookie of the Year in his only season in college basketball with Duke University.

Another rookie to watch out for this season is Boston Celtics’ Tacko Fall. The Senegalese is set to become the NBA’s tallest player at 7’ 5” and is already proving to be a fan favourite. The Memphis Grizzlies’ Ja Morant will offer a very different type of threat from point guard and is expected to compete with Williamson for rookie of the year honours after a similarly impressive college career.

When the general manager of the Houston Rockets, Daryl Morey, sent out a pro-Hong Kong protester tweet, he could barely have expected the impact it would have on his team, the NBA and US-China relations. With a tweet including an image caption: “Fight for freedom. Stand With Hong Kong”, Morey and the NBA suffered a massive backlash.

China is one of the main markets for the NBA globally, and their response was considerable, with the Chinese Basketball Association suspending its relationship with the Houston Rockets and the state broadcasters cancelling its broadcast of NBA pre-season games. It was a particular blow for the Rockets considering Chinese star Yao Ming, the most influential basketball player in the country’s history, played for the team for many years.

With the NBA having a reputation as the US’s most politically active league, the players, coaches and teams have been left between a rock and a hard place. The NBA’s plan of action has been to retreat and retract in the face of Chinese threats, with James, Curry, James Harden and Kerr either refusing to answer, feigning ignorance or trying to play both sides.

It left the NBA open to criticism from all sides, for not standing up for freedom of speech and of hypocrisy, so it was no surprise to see US president Donald Trump take the opportunity to slate vocal opponent Kerr, calling him “weak and pathetic” for refusing to denounce Chinese politics. The affair was a reputational hit for the NBA and makes for an interesting backdrop to the league this year.