High performance director was not willing to work with overseeing committee 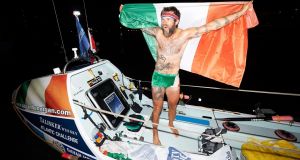 The Rowing Ireland board meeting on Sunday was never going to be dull. Discussion of the proper way to vote in the Olympic Council elections guarantees some heat. Men and women at the top level of the sport are also nervous just now as they await the grant that could provide the basis for another stellar year on the international front.

But then came the Morten Espersen bombshell. A short email from the World Coaches Conference to chief executive Hamish Adams gave no reasons why the high performance director was quitting.

In the revamp of structures after Rio, lead coach Don McLachlan was cut, but Espersen retained his job title. However, the Dane now had to work with a high performance committee. The new committee saw its role as complementary to Espersen, but it is understood that he did not see it in this way.

Espersen, who has worked in his native Denmark and Australia, competed or acted as a coach or high performance director at eight Olympic Games: his Olympic medal tally as a mentor is 11. By his own tally he has been a coaching director or HPD when rowers won over 60 World Championship medals.

His role in Ireland was two-pronged: to build a strong foundation for the future and to guide crews to podium success at top international level. He maintains that the second part “has been achieved fully in 2016”. Ireland’s run of successes backs this contention: World Cup medals; European Championship medals (gold and bronze); three crews qualified for the Olympic Games; an Olympic medal for the men’s lightweight double and a first Olympic finals place for a women’s crew (the lightweight double).

On the negative side, women’s rowing at international level has not thrived in the past four years. The Dane is personable and full of ideas but he has not always been good at bringing those ideas to fruition.

He put new coaches in place in the Ireland system, but from the very start of his time here, in 2012, to what are now the closing days, he voiced frustration. He believed that too many athletes did not accept that they needed a big volume of training to reach international standard. He also could not understand how clubs would not alter and stretch the domestic season to facilitate the international one.

One man whose volume of training and well of commitment has been world-class is Atlantic rower Gavan Hennigan. Fresh from finishing third in the Talisker Whisky Atlantic Challenge and setting an Irish record for a solo ocean row, he had an admission to make. “I never learnt to do flatwater rowing. I just got the boat and learned from there. My friend Henry [Lupton] was an oarsman. He gave me a few tips.

“In a way it was an advantage that I wasn’t an oarsman beforehand. I learnt to ocean row. It’s pretty different [from Olympic-class rowing]. There is a lot more upper-body [work]. You need a really strong pair of shoulders. There are times when you miss the catch for the drive of the legs and you have to use your arms. I’d like to get a proper lesson off the O’Donovan brothers one of these days!”

The Get Going, Get Rowing programme is going from strength to strength, and next up is an expansion into west Cork. Young people are brought into the sport, primarily by indoor rowing. One of the backers is the Women in Sport programme and there will be a question-and-answer session in Blessington on Sunday centred around the aim of bringing more women into coaching.