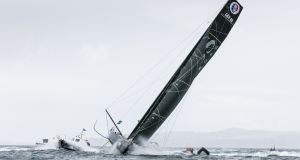 A new initiative to unlock Ireland’s potential as a world sailing hub was announced this week and is already drawing interest from the country’s scattered talent pool.

Ireland Ocean Racing has been formed around a campaign to be skippered by Nin O’Leary for the next Vendee Globe solo round the world race in 2020 but also supporting other projects and campaigns.

The new organisation will be managed by London-based Five Degrees West that has been behind the proven British skipper Alex Thomson and his series of Hugo Boss yachts. Keith Mills who led the successful London 2012 bid is chairman and an early supporter of Thomson’s.

Their chief executive is Cork native Stewart Hosford who commutes to London though the new entity will have an Irish office and staff within the next six months.

Hosford and Thompson had been actively seeking to develop a base in Ireland in recent years with discussions centred around the IMERC centre at Haulbowline in Cork Harbour.

O’Leary (31) hails from the well-known Crosshaven yacht-racing family and he recently turned professional to pursue his offshore sailing ambitions.

He co-skippered with Thomson on the state-of-the-art foil-assisted Hugo Boss in the recent Rolex Fastnet Race and plans are in place for the Irish sailor to build his experience with the 43-year-old British sailor who placed second in the non-stop single-handed Vendee Globe round the world race earlier this year.

Entry in the two-handed Barcelona World Race 2018 is planned for the pair leading into O’Leary’s first solo ocean race with a transatlantic crossing in 2019 as qualification for the Vendee Globe in 2020.

“I’ve had a long-held ambition and target to sail offshore,” he told The Irish Times this week. “The mental and physical side of the sport appeals in a way compared to that of an Olympic campaign travelling around Europe on your own with a Laser for four years. I prefer to take on the ocean and mother nature and that achievement for me personally would be much bigger than a Games [medal].”

A former hat-trick winner of the ISA All-Ireland Sailing Championship, O’Leary is a relative newcomer to ocean racing.

“People have said to me would you not go and do a Figaro but the timing of the [Vendee Globe] race would get in the way and it would be a drain on resources and funding,” O”Leary reckoned.

“Yes, you could build experience on a Figaro boat but this is going to be an IMOCA 60 campaign and for us and mileage with Alex over the next three years is the priority.”

However, he is keen to highlight that the IOR effort will be much than just his own project including Joan Mulloy from Galway who is about to start a Figaro campaign, Tom Dolan’s Mini-Transat campaign and David Kenefick who was recently assisting Enda Ó’Coineen, the first Irish sailor in the Vendee Globe race.

“Ireland Ocean Racing’s vision is to capture all these individual programmes and assist where possible. We’re open arms to anyone trying to do offshore stuff,” said O’Leary.

Key supports will come from the Five degrees West experience in PR, marketing and sponsorship management built over 15 years and £40 million with Thomson’s sponsor in one of the longest standing commercial partnerships in the sport.

His own IMOCA 60-footer is on the cards within the next year which in turn could lead to a permanent base here.

“I first sailed with Alex three years ago,” O’Leary said. “He was struck by how close Cork is to the ideal proving grounds just like the north coast of Brittany, a heartland of ocean racing preparation.

In contrast, being based in Portsmouth on the Solent, it takes two days to sail out to these waters via crowded shipping lanes; from Cork its ten miles – less than two hours.”

That impression led to exploratory talks around establishing a base in Haulbowline but which has yet to happen. So, what would it take to get it off the ground?

“My view is the same as it has always been in that people attract people; infrastructure doesn’t attract infrastructure,” Hosford said. “What you see around the world – whether through teams, events, personalities, activities, word of mouth – is little clusters of excellence and industry growing supply chains.”

Hosford reckons that Volvo Round Ireland Race will continue to grow and become a showcase event with bigger and bigger boats taking part that will also help generate awareness.

Support is already coming in including from Damian Foxall, a former winner of both the Barcelona and Volvo Ocean Races. Olympic medallist Annalise Murphy will join O’Leary and Thomson next week for the delivery passage from Portsmouth to Ireland as part of her preparations for her own ocean race plans.

Wins for Wexford, Cork and Clare; Ireland to name updated squad for England trip 07:20
Dublin overcome the elements and Carlow 06:00
Tipping Point: Eddie Jones’s rhetoric is out of place in a febrile political climate 06:00
Leinster let their feet do the talking as they make it 17 wins on the trot 06:00
Dan McFarland calls out Ulster’s naivety after loss away to Ospreys 06:00
Here is your handy guide to sport on television this week