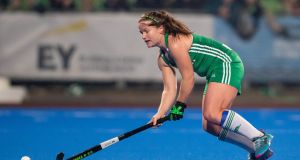 Pegasus’s Shirley left Pembroke shattered when she fired home with the last action of the game. Photograph: Inpho

Shirley McCay completed a remarkable Hockey League comeback for Pegasus at Queens on Saturday when her goal on the stroke of full-time gave the Belfast side a 4-3 victory over Pembroke Wanderers, having trailed 3-0.

It’s the second time in the space of a week that the defending champions produced a gutsy recovery having beaten UCD 3-2 the previous Saturday after falling 2-0 behind early in the game.

Pembroke, top of the table on goal difference ahead of Pegasus going in to the tie, had a dream start when Alice Ward and Amy Kate Trevor put them 2-0 up in the opening seven minutes, with Aisling Naughton’s fourth goal of the season making it 3-0 by half-time.

But two goals in the space of three third quarter minutes brought Pegasus back in to it, Lucy McKee and Niamh McIvor their scorers, with Alex Speers then levelling the game with a quarter of an hour to go.

The flow of goals ceased, though, until the home side won a short corner right at the death, McCay leaving Pembroke shattered when she fired home with the last action of the game.

Pegasus, then, return to the top of the table, three points clear of Pembroke who are now joined on 12 points by Old Alexandra who survived Cork Harlequins’ own attempt at a big comeback on Saturday.

Alexandra were cruising come half-time, a Nikki Evans double helping them to a 3-0 lead, but their advantage was narrowed to a single score when Niamh O’Leary and Emma Barber pulled two back for Harlequins. They held on, though, to make it three wins out of three from their away games in the campaign so far, moving up from fourth to third in the table.

UCD, meanwhile, moved up to share fourth spot in the table with Loreto, who weren’t playing at the weekend, after beating Muckross 3-1, Niamh Carey’s fifth of the campaign giving them the lead in the first minute, before Charlotte Cope doubled their advantage. Estelle Hughes pulled one back for the home side, but Hannah McLoughlin wrapped up the points for the students from a third quarter penalty corner.