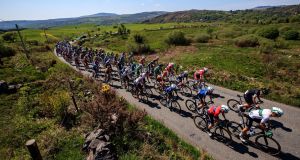 Riders on stage five of the Rás Tailteann on Thursday. Photograph: Bryan Keane/Inpho

German sprinter Lucas Carstensen was best at the end of stage five of the Rás Tailteann, winning an uphill drag race to the line in Mitchelstown.

The stage saw an early attack by stage two winner Robert-Jon McCarthy of the Ireland national team, who rebounded from a bad crash on the descent of the Healy Pass on Wednesday. That fall cost him his chances of a high overall finish and he said that he took out his frustration on the roads from Glengarriff.

The bunch mounted a strong chase behind, with overall leader Cyrille Thiery’s Switzerland National Team doing a lot of the driving. This whittled down the break’s lead drastically. McCarthy jumped clear approaching the finish but was caught inside the final two kilometres, with Carstensen going early and winning the sprint.

Thiery remains 10 seconds clear of Luuc Bugter (Netherlands Delta Cycling X) in the overall standings and is 11 ahead of Damien Shaw (Ireland Holdsworth Pro Racing Team), who is the best Irish rider in third overall.

Ronan McLaughlin is ninth overall, 35 seconds back, and continues as the best county rider.

“Today it was quite an easy stage after yesterday,” said Thiery. “We did our job [chasing] and in the end it was a sprint.” He said his confidence is growing in relation to the possibility of final overall victory on Sunday.

As for McCarthy, he is hoping to continue recovering from his crash and to try again for a second stage win in the three remaining stages.

Bennett’s focus is on Sunday’s final stage in Rome, where he will chase his third stage win in the expected bunch sprint.