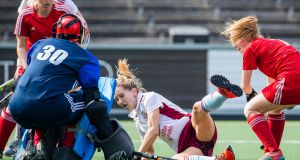 Loreto scored twice in the final 50 seconds of the first half to score a big win for Ireland in the top tier of European hockey as they beat Ritm Grodno of Belarus 2-1 in Amsterdam.

It saw them land seventh place in the EuroHockey Club Cup, with the win potentially having an important impact in keeping Ireland with one spot in the top-line competition. With the Euro Hockey League set to encompass a women’s event in 2020, with equal prize money and televised broadcasts, it is a particularly attractive proposition.

Loreto had trailed in the fourth minute to a Lizaveta Skurat shank that deceived Liz Murphy’s dive.Hannah Matthews equalised from a corner rebound in the last minute before half-time. Thirty-five seconds later they were in front following a patient build up despite the time constraints, with Siofra O’Brien located in the circle. Her shot got a great half-stop from Veranika Mikanovich, but spun toward goal, where Sarah Torrans followed up for 2-1.

Loreto missed a stroke in the second half but they held on, running a penalty corner to the corner rather than opting to shoot in the closing 17 seconds to deny Grodno a counter-chance.

as they lost to a star-studded Waterloo Ducks 2-0 in the battle for bronze.

Both Irish sides have qualified for the EY Champions Trophy playoffs, and will be hoping to grab first place to assure them of a return to Europe in a year’s time.