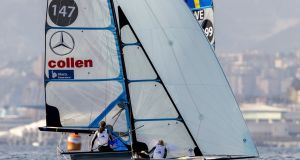 Two Dún Laoghaire sailing campaigns debuted on the continent this week, one with Tokyo 2020 selection as its target, and the other aimed at success in an intensive five-week summer IRC circuit starting in June.

The National Yacht Club’s (NYC) Annalise Murphy kicked off her long-awaited skiff move in the 49erFX at the World Cup Series in Genoa, Italy on Monday. Together with Cork crew Katie Tingle, the pair launched their dinghy on the Mediterranean Sea with a second in race two of the series, but light winds in the Gulf have since blighted the series that has attracted 700 sailors across 60 nations. After five races sailed by Thursday, Murphy and Tingle were placed 32nd from 49.

On-form clubmate Finn Lynch, however, has continued his top 10 performance from Miami and Palma in the Laser class, moving up to third overall after three. With a delayed schedule, racing continues over the weekend, and the hope in the Irish camp is for Lynch to make a third medal race in succession.

With 460 days to the Olympic Games itself, it is the first time in the Tokyo cycle that the Irish sailing team are all competing at the same event; nine boats, four disciplines, 13 sailors and all still seeking nation qualification.

On the Bay of Biscay, the Royal Irish Yacht Club’s Andrew Algeo begins his move on Friday morning to the smaller J99 after national championships success last year in the J109 design.

A crack Irish Juggerknot II crew will contest the Spi Ouest regatta, and it looks like the fleet of 436 boats gathering at La Trinité-sur-Mer is the biggest since 2013.

An exciting class IRC B line-up means the Irish boat is in line for a baptism of fire. In particular, a J99 sistership will be competing in La Trinité and sailed by French pro-sailor Didier Le Moal, who earned IRC World and European IRC Championships success last year in a J112E.

Juggerknot II returns to Dublin Bay in time for the start of the Dublin Bay Sailing Club (DBSC) season on Thursday, and the first of 16 ISORA races starting with a coastal fixture on Saturday 27th. It’s a busy start that gets even busier in June with four major fixtures – offshore and inshore – over five weeks between June 7th and July 14th.

With the first fixture in the SCORA calendar concluding this weekend at Kinsale, the south coast cruiser season holds at least one Co Waterford challenge for Royal Cork’s cruiser racers when the fleet head out of Cork Harbour and turn left for Dunmore East on the June Bank Holiday weekend. It is the first such race in many years, according to Commodore Johanna Murphy.

In the West, a portacabin upgrade aims to open up the potential for sailing on an East Clare lake. Cullaun Sailing Club opens its new clubhouse on Saturday April 27th at Kilkishen. The club is currently home to a mixed fleet of Wayfarer, Enterprise and GP14 dinghies.