Equestrian: Sam Watson top of the class in Ballindenisk 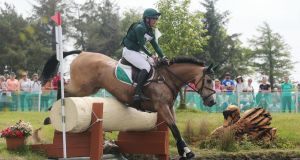 Carlow’s Sam Watson, who was a member of Ireland’s silver medal-winning team at Tryon in North Carolina last September, won the top-rated CCI4*-L class at the weekend’s international horse trials in Ballindenisk in Co Cork when show jumping clear on Sunday with the Irish Sport Horse gelding Imperial Sky.

Watson and the 13-year-old Puissance grey were in second place on a score of 32.6 penalties heading into the final phase, just 0.6 behind Belgian leader Geoffroy De Jamblinne with Consequent Pia Z. Watson jumped a perfect clear round to put the pressure on the Belgian rider who picked up eight penalties and dropped out of the first six.

British riders won four classes with Nicola Wilson, who had three rides at the event, claiming the CCI2*-L on Chabadu and the CCI3*-S with Bulana; Olivia Wilmot landed CCI3*-L on Zebedee de Foja; while the reigning European team and individual pony gold medallist Saffie Osborne, a daughter of racehorse trainer Jamie Osborne, won the CCIJ2*-L with Lakantus.

The Eventing Ireland CCI4*-S was dominated by Japan’s Kazuma Tomoto who finished first on Bernadette Utopia and second on Brookpark Vikenti while Giovanni Ugolotti was rewarded for his trip over to Co Cork when winning the CCI2*-S on Swirly Temptress. Co Tipperary’s Olivia Swan, a daughter of former multiple Irish champion jump jockey, topped the final leaderboard in the CCI2*-S for ponies on Rockon Pedro with the inaugural running of the CCI1*-Intro class going to Co Westmeath amateur Lorraine Kennedy on Major Furisto.

In show jumping, the Miami Celtics’ duo of Tipperary’s Shane Breen and Galway’s Michael Duffy won their ‘home’ leg of the Global Champions’ League in Florida over the weekend in front of team owner, Monica McCourt. After this third leg of the league, the Miami Celtics are in third place (59 points) behind the Shanghai Swans’ squad of Co Cork’s Shane Sweetnam (79) who won the first two rounds in Doha and Mexico City.

Across in Europe, Sligo’s Richard Howley claimed the three-star 1.50m jump-off class at Lanaken in Belgium on Saturday with the 10-year-old grey Zangersheide mare Seahorse Z while, in the same country, there was a victory for Ireland at two-star level in Opglabbeek where Conor Drain landed the 1.45m jump-off class on the eight-year-old Dialetto PS.

There were some good wins for the Irish pony riders competing in Fontainebleau, France over the weekend with the main success on Sunday being Hannah McGoldrick’s victory in the 1.25m Grand Prix on 12-year-old Connemara mare, River View Annie. Earlier in the day, John McEntee won the 1.25m speed class with the nine-year-old ISH gelding, Little Smithe.

At home, the final two legs of the Show Jumpers Club spring tour took place over the weekend with Captain Geoff Curran of the Army Equitation School winning on Carnlea at Coilog in Co Kildare on Saturday while Sunday’s concluding round at Warrington in Co Kilkenny went to Jason Foley riding Castlefield Cass.