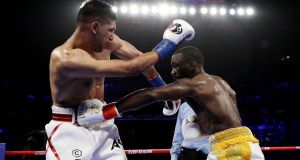 Amir Khan may have been looking for a way out during Saturday night’s frightful beating at the hands of Terence Crawford.

With one wayward left hand, Crawford gave it to him.

Khan, who was floored in the opening round and systematically broken down over the next four, absorbed a punch well south of the beltline early in the sixth. The shot was ruled an accidental blow by referee David Fields and Khan would have been given five minutes to recover under the unified rules of boxing, but trainer Virgil Hunter instead informed the referee after about 40 seconds that he wouldn’t be able to continue, sparing him the gruesome denouement that appeared more inevitable with each passing minute.

Thus Crawford, the switch-hitting three-weight champion regarded by many as the world’s best fighter regardless of weight, retained his WBO welterweight title by technical knockout at the 0:47 mark of round six, an announcement that prompted a thunderous chorus of jeers from the crowd of 14,091 at Madison Square Garden. The unbeaten American led by scores of 50-44, 49-45 and 49-45 in his second defence of the title he captured from Jeff Horn last year following a reign as lineal lightweight champion and exhaustive three-year cleaning-out of the 140lbs division, where he unified all four major belts.

“I could tell I was breaking him down,” Crawford said. “It was just a matter of time. I just took my time. I was disappointed the corner stopped the fight in that manner, but Virgil [HUNTER]is a great coach, and he was looking out for his fighter. I know he didn’t want to go out like that.”

It was an unsatisfying ending to a fight that proved a mismatch from the first round when Crawford, after two minutes of deliberate calculation, detonated a counter right on Khan’s jaw that sent him clattering to the deck. The challenger beat the count but was nearly put down a second time in the closing seconds before he was saved by the bell.

“We made sure this whole camp that we was going to start fast,” Crawford said. “We made it a point because Khan’s a faster starter. We didn’t want to give him no confidence out the door.”

Crawford’s rare blend of power, speed and tactical aptitude were on full display in the second as followed up with more sharp punches upstairs. The Omaha native added another wrinkle when he switched from an orthodox to a southpaw stance in the third and started picking Khan apart with pinpoint accuracy, having timed his opponent to perfection. Then came the fourth when Crawford connected with a left hook and a counter right to back Khan up and then began stalking the challenger around the ring, unloading with punishing combinations to the body.

The end came less than a minute into the sixth after Crawford’s left hand landed low. Confusion prevailed for more than minute as it was unclear whether Khan would take the allotted five minutes to recover or whether Crawford was in danger of a disqualification if somehow the punch had been ruled intentional. Crazier things have come to pass.

“I seen Amir Khan’s face and he was shaking his head and I was getting disappointed the whole time because I knew that he was looking for a way out,” said Crawford, who landed 88 of 211 punches (42 per cent) according to CompuBox’s punch statistics, twice the output and nearly twice the connect rate of Khan’s 44 of 182 (24 per cent). “Not the way that I would have liked to finish the fight. But Virgil is in his corner for a reason and that’s to look out for his fighter. He felt that his fighter didn’t want to fight anymore so he stopped the fight.”

He added: “I felt like I was touching him more and picking up the intensity. He was looking for a way out. I hit him on the leg and his coach stopped the fight and he got it.”

Khan, whose face was badly marked up when he arrived at the post-fight press conference shortly after 1.0am, said the final shot landed in his groin area but that it was Hunter who made the call to stop the fight. He insisted numerous times that he didn’t quit.

Indeed the 32-year-old Khan has and famously in the various seasons of a very good career. There was the 54-second destruction at the hands of Breidis Prescott, the tactically inept stoppage by Danny Garcia and the frightening one-punch walk-off in his bold challenge for Canelo Álvarez’s middleweight title nearly three years ago.

But never before Saturday had the former two-times junior welterweight champion been so comprehensively outboxed.

“I knew in my heart that I could outbox him,” said Crawford, who earned a minimum purse of $5.5m, slightly more than Khan’s $5m. “He said he’d never been outboxed but I haven’t either. Today was the day where one of us was telling the truth.”

Now the 31-year-old Crawford, who is widely regarded as one of the two best pound-for-pound fighters in the world along with lightweight dynamo Vasiliy Lomachenko, has set his sights on a unification belt with Errol Spence Jr, who holds the IBF’s version of the title at 147lbs and is coming off a one-sided beatdown of Mikey Garcia in March.

That Crawford is aligned with Top Rank supremo Bob Arum and Spence is managed by Al Haymon, Arum’s bitter rival, leaves many observers pessimistic about the chances of the fight being made.

“Everybody know I want the Spence fight,” he said. “That’s the fight that everybody want. That’s the fight that I want to prove that I’m the best welterweight in the division. Unfortunately, I don’t know what’s going on [with the promoters]. I can only fight who they put in front of me.” - Guardian

1 BBC to show four live Premier League games as restart set for June 17th
2 Dave Hannigan: Trump gets the clubs back out as death toll keeps rising
3 Philip Browne admits funding model for Irish rugby is not sustainable
4 Sonia O’Sullivan: How to keep your competitive edge from going blunt
5 Coming fourth in the Olympics didn’t change this fearless quartet, time did
Real news has value SUBSCRIBE