‘Did we tie?’: Canada and Germany share two-man bobsleigh gold

Smiles all around as teams both complete race in 16.86 seconds 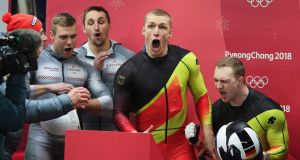 Francesco Friedrich and Thorsten Margis of Germany react as they watch the final run by Justin Kripps and Alexander Kopacz of Canada during the men’s two-man bobsleigh. Photograph: Getty Images

It was one of the closest sliding races in Olympic history, but when Canada’s Justin Kripps and Alexander Kopacz rocketed over the finish line in the two-man bobsleigh final on Monday, they knew they had secured gold.

Trouble was, Germany’s Francesco Friedrich and Thorsten Margis had also won the race.

Kripps had put together three good runs, consistently placing first or second, and he needed to pull out another one to secure his first Olympic gold medal.

Friedrich set the fastest time but Kripps, in the final run of the competition, exactly matched his mark of three minutes 16.86 seconds.

“It took me a couple of minutes. We were in the changing room and I asked Thorsten and I said I’m not sure I understood what just happened, did we tie?,” Canadian brakeman Kopacz said.

Knowing that it had been a tie – the first in the two-man bobsleigh event since Nagano in 1998 – an overjoyed Friedrich and Margis had rushed over to Kripps and Kopacz to celebrate as they finished their final run.

“At first I thought we had won outright but then these guys jumped over and were super excited and I thought ‘Wow these guys are really happy for us!’,” said Kripps, who thought the Germans had been ecstatic about winning silver.

“Thorsten was giving me a hug and he said it was like three hundredths, two hundredths... and then a tie.

Amid the ensuing chaos, it had taken Kripps a while to find his brakeman to tell him.

“It was a sea of emotions, a sea of team-mates and tears from my parents,” Kopacz said. “Lots of yelling and then we were hustled over to the changing room and I realised we tied.”

It wasn’t until Friedrich and Margis explained that the gap had been closing by three hundredths of a second, then two hundredths, then one hundredths, that the Canadian pair knew what was going on.

“They got it when we told them the full time,” said Friedrich who also came joint-first in the four-man bob at last year’s world championships. “They got it that we had a tie.”

Kripps learned how to pilot his sled from Canadian Olympian Pierre Lueders – the same athlete who was involved in a dead heat for first place with Italy in Nagano.

“It was really fun to tie with these guys,” Kripps said. “Two more guys who are as happy as you are.”