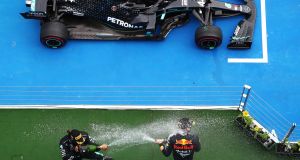 European Best Pictures Of The Day - July 19 - BUDAPEST, HUNGARY - JULY 19: Race winner Lewis Hamilton of Great Britain and Mercedes GP and second placed Max Verstappen of Netherlands and Red Bull Racing celebrate on the podium after the Formula One Grand Prix of Hungary at Hungaroring on July 19, 2020 in Budapest, Hungary. (Photo by Mark Thompson/Getty Images)

Lewis Hamilton won the Hungarian Grand Prix, taking an untroubled victory at the front of the field for Mercedes. Delivering another flawless run from pole, Hamilton enjoyed a pace advantage married to perfect execution that cold not be matched. Max Verstappen remarkably took second place despite crashing his Red Bull on the way to the grid. Valtteri Bottas was in third for Mercedes with Lance Stroll in fourth for Racing Point.

Hamilton produced the calm, controlled performance from pole to flag that has defined so much of his success in F1. Having opened up a gap from the off he was unchallenged throughout, putting in a relentless sequence of laps to build a lead that was insurmountable even by the midway point. He had led by margins of up to 26 seconds, a country mile in F1.

Hamilton took the fastest lap point and now leads the championship with 63 points, in front of Bottas on 58 points.

With Red Bull enduring a difficult weekend in Budapest Verstappen gave them a further headache even before the race had begun. The Dutchman went off on his lap driving to the grid, hitting the barriers and damaging his suspension. The team worked furiously to repair the damage and he was able to start the race. They had done a superb job – Verstappen made amends with an impressive drive to take second.

Ferrari, hopeful of an improvement in form in Hungary, were disappointed. Sebastian Vettel was sixth and will not have enjoyed being lapped by Hamilton with 12 laps to go. The team put Charles Leclerc onto the wrong tyres early in the race with the Monegasque coming home in 11th.

Hamilton’s 86th career win puts him just five shy of Michael Schumacher’s record. On this form it must be expected that he will surpass the German this season. With his eighth win in Hungary he has also matched Schumacher’s record of the most victories at the same circuit. Hamilton scored his first win at the Hungaroring in his debut season in 2007.

There was a further anti-racism statement on the grid, with drivers wearing T-shirt bearing the words “End Racism”. Hamilton and the majority of drivers also took a knee before the national anthem, although it was again a somewhat disorganised affair, with some late or absent.

For Mercedes this was the definitive statement that they are in a league of their own at the front of the grid. Dominant in Austria with its quick corners, they proved equally at home on the slow to medium-paced turns of the twisting Hungaroring. Their strength across both types of circuit and the margin of advantage they have over their rivals is ominous indeed.

On a drying track the majority of the grid lined up on the intermediate tyres and Hamilton made a clean start holding his lead. Bottas, second on the grid, made what appeared to be a jump start and in checking it went backwards to sixth. He was not penalised, while Verstappen made a storming run from seventh to third, passing both Ferraris.

Hamilton immediately opened up a comfortable lead as the teams began taking slick tyres on lap three. The British driver took the quicker tyres on lap four and with the field having all stopped, held a six-second lead over Verstappen in second.

The gap in front was already becoming a chasm, with Hamilton nine seconds clear by lap 11. Bottas moved back up through the field in a clearly quick Mercedes, making it to fourth by lap 18.

Vettel had lost places in the pit stops and Leclerc time and positions when he had taken the soft rather than the medium tyre. Both drivers came back in to take the hard tyre but their race was once more reduced to a battle in the midfield.

By the midway stage Hamilton was in a race of his own, with Verstappen 19 seconds back and also comfortable with a three-second gap on Stroll; the threatened rain did not materialise. The teams stuck to slicks through the second wave of stops, with Hamilton taking fresh mediums on lap 38 and emerged holding his lead.

Bottas, who had moved up to third, proceeded to chase down Verstappen and took a further stop for fresh rubber, hurling himself at the Dutchman but unable to quite make up the gap.

Hamilton was once more untouchable, with so much of a lead the team took a late free pit stop before clinching it with ease. He and Mercedes have grabbed the championship by the scruff of the neck in this opening triple-header of meetings. Wresting it from them will be a tough task indeed.

Red Bull face an investigation by the stewards because they had “artificially dried the grid box” of Alexander Albon’s car by using the engine cooling air of their leaf blowers. A contradiction of the rules stating no part of the track could be dried. Albon finished in fifth.

Sergio Pérez was in seventh for Racing Point in front of Renault’s Daniel Ricciardo. Kevin Magnussen was ninth for Haas, with Carlos Sainz taking 10th for McLaren. – Guardian