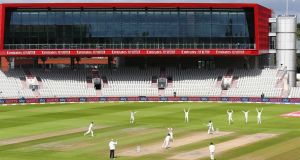 In the end the West Indies, a noble team that has helped to rescue what might have been an utterly barren summer, ran out of steam. They were bowled out for 129 as briskly as the chill wind sweeping across the ground, occasionally bringing scudding showers. So England won the match by 269 runs and the series 2-1 to retain the Wisden Trophy forever.

Here the weather was England’s most troublesome opponent but for two Tests Jason Holder’s side has battled resolutely. Ultimately the shortcomings of batsmen in English conditions were exposed and their bowlers, a valiant quartet, were creaking after three Tests in swift succession.

By contrast England’s bowlers, fresh and eager throughout, became ever more dominant. The strategy of rotating the bowlers has worked extremely well. None of them have bowled in more than two matches – not even Ben Stokes and Dom Bess, who played every game but were not required to bowl here.

In the process Stuart Broad with the minimum of fuss notched his 500th Test wicket to cap an irresistible performance. Inevitably he was the man of the match; his reaction to being omitted from the first Test has been staggering though it is doubtful that he will agree that being dropped – remember that England were aiming for their best side in that game at the Ageas Bowl – was a jolly good idea.

Broad did not keep us waiting long for the landmark. Kraigg Brathwaite, who was Jimmy Anderson’s 500th Test wicket, was the recipient of a nasty delivery. It scuttled through below knee height and this combined with Brathwaite’s habit of staying on the crease made the lbw decision straightforward for the umpire Michael Gough. There was no point in a West Indian review.

Broad may have dreamt of reaching 500 in front of a packed, sun-baked stadium. Here he briefly held up the ball to the empty stands and to the photographers scattered around the ground. The England players formed a semi-circle and applauded. Maybe there will be a proper audience when he gets 600.

Shai Hope, who has endured a wretched series without really looking out of form or out of his depth, looked as if he had decided to play with more freedom. Two sumptuous boundaries came from a Jofra Archer over and he had surpassed his highest score of the series (25) but on 31 he opted for a pull shot, which did not work well.

From the bottom of the bat the ball went skywards towards mid-on. It was swirling in the strong breeze and somebody needed to take responsibility. Who better than Broad to step up? The catch looked simpler than it was but he duly held it. Soon after Shamarh Brooks was caught behind off the inside edge for the second time in the match, on this occasion off Chris Woakes. Brooks has flickered engagingly in this series without producing the major innings. Hopefully he can flourish late in his career; he is always easy on the eye.

Another shower necessitated an early lunch. A blustery wind blowing from leg to off is not ideal for bowlers of any type but they stuck to their task, while the batsmen were inclined to play their shots even though the draw was their highest ambition. Even so the next dismissal was profligate whatever the situation. There was hesitation among the batsmen after Jermaine Blackwood had punched the ball square of the wicket. Dom Bess gathered the ball and his throw hit the stumps with Roston Chase a long way from home.

Bess, as Somerset followers have discovered, hits the stumps far more often than most. This was his solitary contribution in the field in this match. There is only one other occasion in the last 15 years that an England spinner has not bowled a ball in a Test match – when Adil Rashid was idle in the Lord’s Test of 2018 against India.

Now Woakes, a perpetual unsung hero in this series, took charge from the Jimmy Anderson End with a trio of lbws. Holder, Shane Dowrich and Rahkeem Cornwall were all struck in front of the stumps and only Holder decided to review – to no avail. This has been an unusually common mode of dismissal for the tourists; there have been 19 lbws, a reflection of their techniques and the low-bouncing nature of the surfaces.

Woakes finished with five for 50; he had bowled England to a famous victory, not because of the tautness of the finish though the rain returned with a vengeance soon after the end of the game. This was memorable because we have never had a behind closed doors series before – and hopefully, after the Pakistan series, we never will again. But in typical fashion the self-effacing Woakes was always unlikely to dominate the headlines.

This was Broad’s day yet again; he joined the super-elite when reaching 500 and of course he returned to take the last wicket of the series from the first ball of a new spell. It was a rusty loosener that went down the leg-side; Blackwood had a swing and edged it.

For Broad bowling has never been a simpler process. He finished the match with 10 for 67, 62 runs and 501 Test wickets. He was the man of the match and whatever the rotation plans it is now unthinkable that Broad and Woakes (let’s not forget him) will be left out of the team when Test cricket resumes here against Pakistan in a week’s time. – Guardian