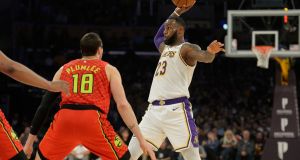 LeBron James took another milestone in his stride as he passed Wilt Chamberlain to become the fifth most prolific scorer in National Basketball Association (NBA) history on Wednesday.

James blew past Chamberlain by scoring 44 points for the Los Angeles Lakers in a 126-117 home victory over the Portland Trail Blazers.

Next in James’s sights is boyhood idol Michael Jordan, a player he worshiped so much that he wears the same number 23 jersey made famous by the retired Chicago Bulls legend.

The 33-year-old has 31,425 career points, 867 behind Jordan, a mark that should easily be within reach this season for James, who has averaged a little more than 27 points-per-game during his career.

“Anytime my name is mentioned with some of the greats who have played this game, I’ll always think back to my hometown, how far I’ve come,” said James.

He was referring to his hometown of Akron, Ohio, the gritty blue collar city south of Cleveland where he was born and raised. James left the Cleveland Cavaliers in the off-season for the storied Los Angeles Lakers, which despite having fallen on hard times in recent years, remains one of the league’s glamour franchises.

James needed 39 points on Wednesday to pass Chamberlain. He reached the mark with just under four minutes remaining when he converted a free throw.

“Knowing where I’ve come from and knowing how hard it was to get to this point... I give it all to the man above for giving me god-given abilities,” James said. “I’m taking full advantage of them and then my coaching staff and team -mates throughout my 16 years so far have got me to this point.”

James has been selected as NBA most valuable player four times and has three championship rings, two with the Miami Heat and one with the Cavaliers.