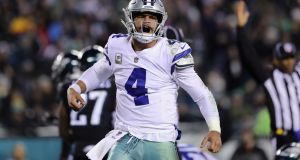 The Cowboys have been one of the most frustrating teams to watch this season, sometimes showing the balanced effort of a Super Bowl contender, other times looking like a below average team plagued by inconsistent quarterback play and a disjointed organisational vision.

Dallas’s Jekyll and Hyde season was encapsulated in their surprising 27-20 away victory against the Eagles on Sunday, where Dak Prescott once again looked more like a good backup quarterback than an elite signal-caller and Ezekiel Elliott showcased ability that has helped mask the Dallas attack’s structural shortcomings throughout his career.

After two consecutive losses to the Redskins and the Titans leading into Sunday’s match, the Cowboys appeared out of play-off contention in the NFC. Fans were calling for head coach Jason Garrett to be fired, and Jerry Jones went as far to declare Dallas’s 14-point week nine loss to Tennessee a “step back” for the team, a rare critique from the mercurial owner.

Against all odds and an invisible measurement called momentum, the Cowboys marched into the house of the defending Super Bowl Champions and came away with a narrow victory on Sunday - and in the process further jumbled the already messy NFC play-off picture.

Prescott finished with 270 passing yards and a touchdown to Elliott, who added a touchdown run and averaged nearly eight yards per carry in a 151-yard rushing performance.

Perhaps more impressive than Dallas’s victory itself was the resolve and fight the team showed to hold off a late Philadelphia comeback.

A Carson Wentz touchdown pass to tight end Zach Ertz tied the match at 20 with 7:27 left to play in the fourth quarter, but Dallas scored on the very next drive, moving 75 yards down the field to take a 27-20 lead with 3:19 remaining.

The Cowboys defence forced an Eagles punt on the ensuing possession, but a defensive stop by Philadelphia on the next drive gave Wentz one last chance to tie the game with a touchdown.

Taking over on Philadelphia’s 32-yard line with just under 40 seconds to play, Wentz completed three passes to Ertz, moving the team to the Dallas 32 with 11 seconds remaining in the game.

On the last play of the game, Wentz completed a 23-yard pass to Ertz (his 14th reception of the game), who then lateralled the ball from inside the 10 yard line to Golden Tate for no gain as time expired.

As of Monday morning, 11 of the NFC’s 16 teams still have a realistic shot at the play-offs.

The Panthers still have the Seahawks and Falcons on the schedule, and the Vikings still have matchups against the Packers and Seahawks.

Wild Card spots are going to be up for grabs over the season’s final seven weeks, but given the crowded NFC picture, play-off seeding could very well be determined by head-to-head and conference records tiebreakers. Bedlam will ensue, hard-fought matches will be many.

Had the Eagles defeated the Cowboys on Sunday as expected, at least one team - disregarding the highly unlikely scenario in which Dallas would win out - would have been qualitatively eliminated from the Wild Card rat race.

For now, the whole NFC is madness, and will make for one of the most entertaining second-half play-off races to watch in recent years.

The back and forth affair between the two division rivals featured five lead changes and almost 900 yards of total offence. A late touchdown run by Seattle running back Mike Davis brought the game within five, with the Rams leading 36-31. Seattle forced a Rams punt on the next LA possession, giving Russell Wilson and the Seahawks attack one last drive from their own 25 to win the game.

After a 29-yard pass from Wilson to wide receiver Tyler Lockett and an 11-yard scramble by Wilson to put Seattle in LA territory, the Seahawks attack stalled. Following a spike to stop the clock, Wilson threw three consecutive incomplete passes from the Rams’ 35 yard line to end the game.

Backed up to their own eight yard line leading 21-10 against the Falcons, Cleveland’s Nick Chubb raced through the right side of his offensive line to a near-untouched 92-yard touchdown run.

The franchise-long run was the longest play from scrimmage this season and the second longest run in NFL history by a rookie running back (Pittsburgh’s Bobby Gage had a 97-yard run in 1949).

Next week’s key matchup: Eagles at Saints/Chiefs at Rams

Coming off a demoralising loss to the Cowboys, the defending Super Bowl Champion Eagles (4-5) will look to stay in the play-off picture against Drew Brees and the New Orleans Saints (8-1). A Saints victory would inch the team one step closer to home-field advantage in the NFC play-offs and significantly diminish the chances of a second consecutive Philadelphia play-off run.

Elsewhere in the NFL, the Chiefs (9-1) travel to LA to take on the Rams (9-1), as the league’s two best teams face-off in a cross-conference battle that could function as a Super Bowl preview.