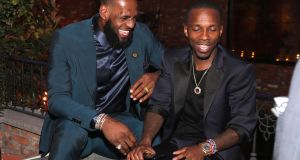 LeBron James was a high school phenom on the cusp of fame, walking through Akron-Canton airport when he spotted somebody wearing a throwback NFL jersey, bearing the name of Warren Moon, the Houston Oilers’ iconic black quarterback from the 1980s. Curious as to where such a classic garment might be bought, he struck up a conversation with the stranger.

Rich Paul was a 21-year-old turning a buck sourcing retro shirts in Atlanta and selling them out of the boot of his car around his native Cleveland. Once he confided in James the name and number of his main contact in Georgia for old-school gear, and guaranteed a discount for him there, the pair became fast friends. The aspiring hustler with an eye for a main chance and the wunderkind who was about to become king.

Seventeen years later, the likely lads from Ohio are among the most influential figures in the NBA, Paul as a super-agent, LeBron as LeBron. But, they are also now busy trying to alter the American sports landscape, doing something to pull up the generation coming behind them. A task more difficult perhaps than most they’ve faced.

Last Tuesday week, the National Collegiate Athletic Association (NCAA) issued new criteria for agents representing student-athletes wishing to explore their professional options while retaining amateur eligibility for college basketball. Among the new stipulations was that agents must be in good standing with the players’ union, be willing to sit an in-person exam and possess a bachelor’s degree. If, to outsiders, the last requirement seemed bizarrely specific, those in the know recognised immediately what was afoot. Within hours, James tweeted that this was “the Rich Paul Rule”, specifically designed to rule his agent out of the game because he isn’t a college graduate.

“Can’t Stop, Won’t Stop!” tweeted James in a subsequent flurry of smiley face emojis. “They BIG MAD and Scared. Nothing will stop this movement and culture over here. Sorry! Not sorry.”

Despite the Trumpian disregard for proper capitalisation, everybody knew what James was saying. The NCAA is petrified of Paul who they fear is bent on disrupting the cosy cartel that has made billions of dollars operating a corrupt monopoly that turns talented basketball players into indentured servants or, as they prefer us to call them, student-athletes. Presiding over a sport where coaches earn $9 million a year and star point guards aren’t allowed a free sandwich for fear of compromising their faux Corinthian values, the NCAA care about the welfare of student athletes the way La Cosa Nostra used to care about the quality of garbage collection in New York city.

They have been assisted in their exploitation racket by the NBA bringing in the so-called “One and done” rule in 2006, preventing the most gifted teens from entering the league’s annual draft until they have been at least one year out of high school. The idea was to force these players to spend a season in college basketball where the NCAA then conveniently looked the other way while they pretended to be students for a few months in order to remain eligible for money-spinning March Madness. Their “studies” inevitably ended when their team’s interest in that tournament did.

Last year, Darius Bazley, a promising six foot nine forward out of Ohio, chose a different path. After initially declaring he’d forego college to earn $125,000 playing a year in the G League, the NBA’s relatively new attempt to offer another alternative to elite prospects, he made more headlines when he announced he was sitting down completely until the draft. Not only that. His agent, Paul, had negotiated a three-month internship for him with New Balance worth $1 million. The kind of eye-popping contract detail that caught the attention of every high school prodigy in the country and rattled the cages of the NCAA. Hence their ham-fisted attempt to put manners on Paul last week.

“The harmful consequences of this decision will ricochet onto others who are trying to break in,” wrote Paul in an essay for The Athletic. “NCAA executives are once again preventing young people from less prestigious backgrounds, and often people of colour, from working in the system they continue to control. In this case, the people being locked out are kids who aspire to be an agent and work in the NBA and do not have the resources, opportunity or desire to get a four-year degree . . . Does anyone really believe a four-year degree is what separates an ethical person from a con artist?”

His language was well-chosen. Anybody paying attention knows the NCAA is long on con artists and woefully short on ethics. Paul, backed up by James and all his other heavyweight NBA clients, also realises that every blow helps when trying to bring down a Leviathan that has ripped off so many African-American athletes for decades.

Just six hours after that piece was published, the NCAA amended their rules for agents and removed the degree clause. Six hours. An organisation notorious for being unwilling to change its ways caved that quick, like a bully suddenly realising he was facing an opponent unlikely to back down. Of course, this is a body more used to smacking around naïve college freshmen and their poor families with a famously hefty rule book than squaring up to genuine power brokers.

Hopefully somebody can interpret that phrase for the NCAA.