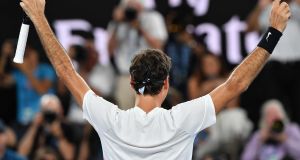 What should have been a Sunday stroll for Roger Federer on a warm summer’s evening in his favourite city away from Switzerland turned into an ordeal under the roof on Melbourne’s Rod Laver Arena before he subdued an inspired Marin Cilic in five sets to win the 2018 Australian Open.

But it was a nervy, occasionally ill-tempered victory as Federer, 36, became the oldest winner of the title since Ken Rosewall 46 years ago. It was his 50th five-setter in slams, although he had lost 20 of them. Cilic had a better 27-12 record. Federer had also lost four of seven five-setters in slam finals: against Novak Djokovic at Wimbledon in 2009, Juan Martin del Potro in New York the same year, and Rafael Nadal twice: in the 2009 Australian Open and most memorably, at Wimbledon in 2008.

He threatened to blow 29-year-old Cilic off the court in a first set that sped by in 24 minutes. Eight months ago, the imperious Swiss straight-setted a hobbling Cilic to win his seventh Wimbledon title, and, in the absence of his broken, beaten or absent peers at the end of the fortnight here, he was a raging favourite to repeat the embarrassment here.

The re-run looked like being a striking counterpoint to the drama of his five-set win over Rafael Nadal in last year’s final, as Cilic, newly elevated to No 3 in the world after beating Kyle Edmund in the semi-finals, could not get going.

The roof was on to guard against the 40C heat baking fans who were watching on the big screen outside in the early-evening sun. But, as the on-court temperature dropped to a pleasant 27C, the decision seemed marginal. It did allow them to turn on the air-conditioning, though. Neither player called for an iced towel, nor did they look to be struggling physically.

Federer and Cilic, who are friends, did not play like a couple of mates having a hit on holidays in the Maldives – which is what they were doing a couple of months ago – although Cilic’s botched smash to drop serve in the opening game was charitable in the extreme.

At Wimbledon last summer, Federer ruthlessly exploited his opponent’s obvious difficulty in moving because of blisters. In the semi-final here on Friday night, he did the same to the young Korean Hyeon Chung, who had to quit with ripped skin on his feet after two games of the second set.

Federer dictated nearly ever point in the first set, even the ones he didn’t win – and there weren’t many of them. He served out for 6-2 in 24 minutes, only three minutes longer than Cilic took to despatch Joao Sousa in the first set of their round-two match. Cilic now seemed frozen in the heat. The circumstances and the opponent looked to have transfixed his bones.

However, the graceful Croatian was vivified into a grinding fightback in the second set, saving four break points and was one point away from levelling in the 10th game. He found enough steel to resist three Federer aces in the tie-break and smashed an overhead to make it one apiece after an hour and 24 minutes.

Federer de-powered his serve in the third set to rediscover his rhythm, but his precision and his all-court game remained razor sharp. Cilic had tightened up his groundstrokes in the second set, but a wayward forehand cost him his serve in the sixth game, and Federer looked as if he would pull away from him like a cab driver finishing his night shift.

However, there was a dramatic and unexpected detour in the fourth. Federer was 3-1 up and had a point for a double break when his first serve deserted him at the very moment Cilic found the power in his forehand. Fist-pumping, with eyes blazing, he scrapped artfully to take the set. Cilic was playing his best tennis of the tournament, and they went to a fifth.

His frustrations got to him when he chided an official for a close call against him at 30-all in the second game of the decider – but it worked. He forced the break for 2-0 and was ready to go for the line again. The finish was quick and anti-climactic. Federer broke again for 5-1 after half an hour in the set, and began his celebratory final service game with his 24th ace, followed by an unreturnable serve down the T, just missed a 25th ace, forced Cilic to hit a forehand wide. A wide kicker to the ad side was too good for Cilic and the championship was Federer’s.

Federer confessed that a year ago he did not think he would get past the quarter-finals here, given he had been out for six months healing his wounded knee. The Peter Pan of tennis gave every impression on Sunday evening that he could go on until he is 40, although the fairytale might always go to script.