Tragedy strikes close to the end of the 6,000 nautical-mile Leg 4 from Melbourne to Hong Kong 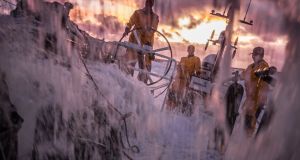 Note to self: taking a bus tour to Hong Kong’s highest peak to admire the view then walking 12k back to the city after spending three weeks at sea in an ocean race… not a good idea.

After finishing Leg 4 of the Volvo Ocean Race from Melbourne to Hong Kong at the weekend, we’ve been taking some time off to unwind after a tough leg for several reasons.

A downhill stroll from Mount Victoria might be okay normally but nearly non-stop upper-body fitness has been at the expense of leg muscle and I woke yesterday with legs like jelly so it’s off to the gym for some badly needed conditioning.

Getting ashore has been a big relief as the last leg was massively demanding and for a while I doubted whether I’d be able to continue in this race.

But now that I’ve spent some time ashore, I’ve gained new perspective and I’m as determined as ever to complete the race and finish what I set out to do.

However, the end of the 6,000 nautical-mile leg has been marked by sadness across the fleet following the collision between the Vestas team and a Chinese fishing-boat 30nm from the finish.

One person from the fishing-boat died and nine others were rescued when their vessel sank. An investigation is underway but that won’t change the terrible impact on the dead man’s family or lessen the pain for the sailing crew. It’s constantly on all our minds.

The incident occurred just as Team Scallywag made good on their week-long lead and came first into their home port which is a huge boost for their morale as it shows their potential.

For ourselves on Turn the Tide On Plastics, we again placed last but we’re not letting that take away from our performance in the first half of the leg and how we led the fleet into the Doldrums.

This was where my head was really wrecked and the contrast between offshore racing and day racing became really evident.

When preparing for my Olympic campaigns, whether a training or competition day, everything is governed by a process that usually is no longer than four to six hours. You sail and come ashore, debrief and go home, feed and then sleep fully in a proper bed.

In an offshore race, a single watch is four hours and there are typically three of these a day but at any time this can be disrupted by a boat manoeuvre or call for more to come on-watch so getting into a rhythm is almost impossible.

Even though this last leg wasn’t as brutal in terms of sea state (well, apart from the first few days) the conditions in the tropics were still challenging.

When we sailed into the Doldrums – in the lead – life on board became pretty tedious for almost five days. Off-watch, the cabin was like a 40-degree oven so being on deck was a relief of sorts but keeping regular sleep was next to impossible.

I’d say we were all pretty fed up with the Doldrums especially as we parked up under cloud after cloud even though we were alongside the overall race leader Mapfre for most of the time until they got their break and eased away from us.

We began cursing every cloud that came close to us as we were powerless to sail away or around it.

The guys would go up the mast to try and spot breeze – no easy task with a black carbon rig and in that heat they were almost like roast chickens as they couldn’t shelter from the sun properly.

Luckily, there’s a great bunch of people on our boat and everyone rallied together which has made a huge difference to me. We have a short break in Hong Kong, then the fleet moves across to the Chinese mainland (in a non-scoring leg) before we return for the sixth leg to Auckland.

That long leg southwards will repeat much of the leg we’ve just done including the Doldrums. But I’m relishing the prospect now that I know what to expect plus I’ve lots of friends in New Zealand so there’s added motivation to get there.

It looks like I’ll be on the reserve panel for the stage after from Auckland to Brazil so if I’m rested it’ll mean a break in New Zealand instead of the Southern Ocean. But that’s almost two months away and we have thousands of miles to race before then.

Overall, I’m much happier with pretty much every area of the boat and can do most jobs on deck from trimming to steering as well as the standard stacking of gear and my role of managing the team’s food.

One thing is, I’ve haven’t been up the rig and have no plans to. No interest. Swinging around a hundred feet up off the deck? Nah. I’d probably puke on the people below.