While a pandemic rages, the commander-in-chief falls back on what he knows best 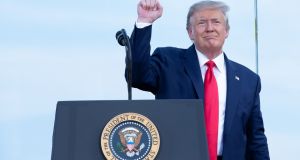 US president Donald Trump mounted an explicit defence of the Confederate flag suggesting that Nascar had made a mistake in banning it from its auto racing events, while falsely accusing Bubba Wallace of perpetrating a hoax involving a noose found in his garage. Photograph: Cheriss May/The New York Times

Donald J Trump has issued 53,500 tweets (and counting) since he made his social media debut back in 2009 when he was just a symbol of Big Apple excess and vulgarity. There can be no question that when future biographers and historians sit down to account for the most grotesque presidential cycle in the history of the republic, they will be poring over those messages – and the millions of replies, both outraged and approving – which they have generated.

Phil Graham, the former Washington Post owner, is credited with the old saying that journalism is the first draft of history. But now that the Lamestream Fake News media empire has been outed by POTUS, the first draft on the life of the Donald belongs to his personal Twitter feed and its slow demonstration of a mind turning more bleak and narrow and paranoid as the pressure mounted and the limitations – of his curiosity, his empathy, his knowhow, were exposed. This week, for instance, the big guy had sports on his mind.

Even as America’s coronavirus case numbers continue to soar ominously in sporadic states and dark clouds gather over the opaque history of his personal wealth, the 45th president of the United States spent this dull and feckless July week – devoid of celebrity golf tourneys, of Mar-A-Lago events, of global conferences – firing out broadsides in the direction of Nascar and American football.

Over a fortnight has passed since the FBI concluded that a hate crime was not behind the presence of a noose hanging in a speedway garage assigned to Bubba Wallace, Nascar’s only African-American race driver and the person who led calls for the removal of the Confederate flag from the race tracks.

The photo of the noose, with its obvious connotations, looks sinister. It was clearly knotted by someone. No other garage had its pull-rope tied into a noose. But the investigation concluded that it could find nothing premeditated and that the noose had been there before the garage stalls were even assigned to drivers: that it had been a bizarre coincidence.

Nascar issued a statement of relief and an inevitable firestorm of debate quickly flared on social media, with all kinds of conspiracy theories, including the inevitable accusation that Wallace had perpetrated some kind of hoax. In fact, the driver wasn’t the person who discovered the noose and wasn’t even aware that it had been reported to Nascar, who initiated the investigation.

Over the summer Wallace has emerged as a prominent advocate for the Black Lives Matter movement. When he was told about the noose, he quickly posted his reaction on Twitter, saying that “today’s despicable act of racism and hatred leaves me incredibly saddened and serves as a reminder of how much further we have to go as a society”. That was June 22nd.

Two days later, the federal investigation ruled out the general assumption that the noose had been left there as a deliberate symbol of hate. Immediately, the driver faced a predictable few hours of bile and loathing across various platforms. In an interview on CNN, Wallace admitted that the backlash was left him feeling frustrated and “pissed”. “Are you reading social media?” the interviewer asked him and when Wallace conceded that he was, he half counseled: “Don’t. Don’t.”

And because the world is so frayed and distracted and under siege from economic and viral stresses, the moment seemed to have passed until, from some reason, in entered the mind of the Donald on Tuesday.

You imagine the big guy padding around the interior of the White House, restless and malcontented as he walked in the literal footsteps of Eisenhower, of LBJ, of Obama and maybe coming across a Nascar item when flicking over to SportsCenter. And remembering then how much Bubba Wallace gets on his wick.

Out with the phone, on to Twitter and wondering: “Has Bubba Wallace apologized to all of those great NASCAR drivers and officials who came to his aid, stood by his side and were willing to sacrifice everything for him, only to find out that the whole thing was just another HOAX? That & Flag decision has caused lowest ratings EVER!’

The message contained Trump’s Twitter trade marks – the capitalisation for emphasis, the depressing laziness when it comes to spelling “and”, the exclamation marks. And it was also further evidence of how Trump regards everything in the world, including the governance of his country, as an on-going popularity contest in which decisions must be based on ratings rather than on fairness or justice or ethics or any of that stuff.

The reference to “all those great Nascar drivers” concerned the march, in solidarity, behind Wallace’s car by his fellow competitors. Trump’s jumbling of the noose-discovery with the principled decision to end the sport’s association with the Confederate flag is just another example of where he stands during this delicate and volatile moment in America’s struggle with its own racial history.

On the same day, his mind wandered towards the imminent demise of the team name of Washington’s longstanding NFL team, the Redskins. With major retailers withdrawing their merchandise, the writing is on the wall. And Trump is sickened, noting that “they name teams out of STRENGTH, not weakness but not the Washington Redskins and Cleveland Indians look like they are going to be changing their names in order to be politically correct. Indians, like Elizabeth Warren, must be very angry right now!”

Soon, he moved on “the China Virus” but not before he got 52,000 retweets for his thoughts on the Redskins. Trump’s scattergun bluster and hatred is so generalised and predictably volatile by this stage that his Twitter messages receive nothing like the attention they did during the first year of his presidency.

Even Wallace, after acknowledging that it was weird to imagine that the president of the United States was thinking about him, particularly during a fearful global summer defined by a pandemic and a fierce economic storm, laughed it off.

It is comforting to interpret the tweets as evidence of Trump under pressure: that the messages were fired out as a distraction from the imminent news that the supreme court has ruled that New York prosecutors can examine the president’s financial records to scrutinise his tax returns, a move he has blocked throughout his presidency.

But by the time that privilege has passed through the machinations of the lower courts, the November election date will have passed. And Trump might be back in the White House. By then, Washington may well have a newly named football team but nothing else will be changing for the better.