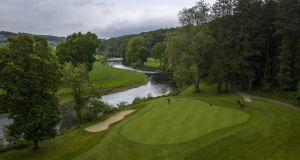 Golfers on the first day of reopening on May 18th at Bunclody Golf Club in Co Wexford. Photograph: Stephen Heaney/Inpho

Early mornings have always been familiar to those who play golf. From the elite professionals to regular club golfers, none are strangers to a crack of dawn alarm call and that unbeatable feeling of the sun rising over the course as the first tee shots of the day are whacked away.

Lately, however, that familiarity has come in handy for another reason. That’s because, at many clubs, it has now become the battleground to get your name on the timesheet for the following weekend’s competition within minutes of it opening up.

In the past only some of the bigger golf clubs in the country with large memberships would fill their timesheets in a matter of minutes but, since courses opened their doors again on May 18th, the unprecedented demand for golf, and in particular membership, has meant spaces on the course are at a premium in clubs around the country.

When golf was allowed to return in phase one of the Government’s coronavirus exit plan, the GUI were keen to point out that the sport was in a “privileged” position and needed to take that seriously. Now, two months on and with the vast majority of society and sport back up and running, the headstart golf was afforded looks to have created an unexpected bump – at least in terms of the number of people playing.

There are plenty of factors behind this. The mass, mainly temporary, unemployment caused by the pandemic meant a lot of people had a lot of time to fill, while the huge numbers of people now working from home represents a sector of the population that suddenly have a lot more time on their hands on summer evenings when they would usually be stuck in traffic.

The suspension of virtually all other organised sport, bar tennis which also returned on May 18th, also left a lot of people looking for a new pursuit to take up. Mix them all together, add in the fact that golf is a sport that can easily be played with social distancing in place and there is a recipe for membership numbers to soar.

For instance, in the six golf clubs managed by Carr Golf – Charlesland, Castleknock, Corballis, Elmgreen, Hollywood Lakes and Seapoint – a total of 751 new members joined during the period from just before reopening on May 18th to the end of June.

Initially a lot of clubs operated a system where members could only play nine holes in a day so as to give everyone a chance to get back to the course. As time went on and people returned to work that was extended to 18 holes and, as of last Monday, the GUI permitted clubs to recommence competitions for both members and visitors as well as allowing casual visitor golf.

Sitting just yards from the shoreline of the Atlantic and only a 10-minute drive from Eyre Square, Galway Golf Club is one of the biggest and best established clubs in the country in terms of membership numbers. After taking in some new members in January and February of this year, boosting its figures to the maximum capacity of 1,140 ordinary members, the club is now operating a waiting list for the first time in years, says general manager Dave Kelly.

With so many people looking to play and with only 18 holes at the club, it’s been a battle to meet the demand which, since reopening, has seen timesheets operate between 90 and 97 per cent capacity every day.

“Demand has been manic to be honest. We’re still operating two courses off nine holes one day a week to try and satisfy the demand and then we’re back to 18 holes for the other six days,” says Kelly.

“Last Sunday was our first Sunday competition and we had about 30 people on the waiting list during the week that couldn’t get on the timesheet from 7am until 4.30 or 5pm. Once Sunday came that had washed through to zero because the weather was forecast pretty poorly. But then again now for next Sunday we’re looking at even higher levels of demand with more people than that on the waiting list, so it’s difficult at the minute with so many people being available to play.”

While Galway would be one of the busiest golf clubs in the country at any time – they estimate a total of around 60,000 rounds a year are played on the course and that’s expected to rise this year – the effects of more people taking up the sport has been felt at many smaller rural clubs as well.

Rathdowney Golf Club in Laois sits between the M7 and M8 but is very much the epitome of a small rural golf club. When the Covid-19 pandemic hit in March the club was looking at a €96,000 hole in its finances this year and had just under 280 members.

Now, just over three months later, captain Matt Doyle is hopeful that by the end of the year they can get back to the same financial position they were in last year, largely thanks to an increase of over 200 new members as well as an influx of green fees, while at the moment the club is buzzing to the sounds of a very busy open week.

Despite communication issues and a difficulty in holding meetings remotely thanks to dodgy rural broadband, the club introduced two new membership options. For €750 new members can join for the rest of this year and all of next year with full GUI handicaps while a social golf membership – which allows golfers to play until the end of 2020 but not in competitions – is also proving very popular at a price of €200.

A common theme among clubs across the board has been GAA players taking up membership to fill the void left by the lack of training and matches during lockdown and at Rathdowney it’s no different.

“What we found was, in north Kilkenny, north Tipperary and south Laois, literally every GAA club in the area piled in for that one [the social golf] and we took over 50 new members on the two-year one,” says Doyle.

“We’re still down 30 per cent on this time last year but I reckon if Covid stays away and the weather plays ball we’ll hopefully be near or thereabouts where we were last year by December.”

For many clubs in Ireland one of the most difficult areas is bringing in members in the age group between 20 and 40 which, in general, represents a missing generation in golf as people drift away from the sport due to family or work commitments before taking it back up again in later life.

In Galway, Kelly and his team boosted that cohort of their membership in 2016 and 2017 with special under-45 rates. At Rathdowney Doyle says the club would definitely have been put in the bracket of an ageing membership before the pandemic, whereas now he says the younger blood “has completely transformed the membership of our club for the better. They’re absolutely smashing chaps. There’s a county hurler who is with us three weeks and he came in after a round and said ‘lads I’m going back training but that doesn’t mean I won’t be coming in to see you. I absolutely love what you’re doing here’.”

While membership numbers are soaring, the question of whether golf is suddenly booming is a difficult one to answer. With no restaurant and bar, green fee and retail revenue for over three months, clubs took a major hit to the pocket and, though large numbers of new members provide a welcome boost, retaining those new faces will prove a challenge as more and more of society reopens and other sports return. For some of the higher end clubs, particularly the world class links courses that dot the coastline, the lack of overseas visitors is a major hit.

In Galway, Kelly says that the appetite still remains strong and it’s up to each club now to keep hold of new members, particularly those who may have only joined until the end of this year.

“It’ll have had a major impact on two fronts, I suppose. One will be the sheer level of demand we’re experiencing and the number of rounds on the golf course and having to cater for that but the other effect will be a fairly substantial drop-off between bar and restaurant and green fee revenue.

“There’s no doubt that there’s an increase in demand, both from the one-off golfer and from people that are falling back in love with the game because there’s very little else to be doing and it’s up to each club then to convert them and make sure they stay and keep them as members over the years.”

Whether it’s slow play, dwindling participation numbers or ageing memberships, there is never a lack of negative commentary around golf but perhaps now, even with plenty of challenges to face, there could be opportunities on the horizon.

Lewis Hamilton claims pole position in Barcelona 15:42
Dublin SFC match called off due to positive Covid-19 test 15:34
Mikel Arteta given more control at Arsenal as Raul Sanllehi leaves 14:17
As ever, Ronnie O’Sullivan sparks debate at the Crucible 15:37
‘Historic humiliation’: Spanish press reacts to Barca drubbing 12:39
Here is your handy guide to sport on television this week