Katie Taylor: ‘This is going to be my toughest fight to date as a pro’ 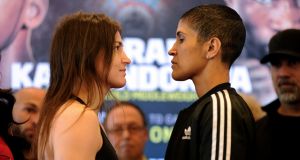 Katie Taylor’s world title defence against Cindy Serrano may not top tonight’s fight card at Boston’s TD Gardens but the Bray fighter is very much the headline act if the local newspapers here are anything to go by.

The five-time world champion and Olympic gold medallist steps into the ring for just her 11th professional bout, her third in the United States and is firmly on course to becoming the next big thing in women’s boxing.

“It really is amazing,” said the 32-year-old. “When I first turned pro I didn’t know what to expect so it has been a happy surprise how well it has gone over the last two years.

“But to get on the front page of the papers over here is a huge deal and the reception has been unreal.”

Her debut fight in a city with a deep Irish presence certainly feeds into some of the hype but Taylor’s potential to transcend a sport yearning for a global superstar cannot be underestimated. The inexorable rise of UFC coupled with the recent announcement that TV network HBO is ceasing its longstanding US boxing coverage has put the sport under increased strain on this side of the Atlantic.

The “over-the-top” subscription video streaming service DAZN will broadcast Taylor for the first time yet she remains unfazed by the media frenzy.

“The pressure hasn’t been a factor for me for years, Taylor said. “I’ve been dealing with it for a long, long time. If anything I perform well under pressure and it brings the best out in me.

“I know how to control my emotions on the day of the fight and that comes with the experience as an amateur and a professional.”

Widely tipped to beat 36-year-old rival Serrano with consummate ease, Taylor is under no illusions of the task at hand. The Puerto Rican is a one-time world featherweight champion and will be no pushover.

“This is going to be my toughest fight to date as a pro, Serrano is very experienced and a top seasoned professional,” admits Taylor.

Yet much has been made too of the recent provocations from Serrano’s younger sister Amanda, the only women’s boxer to win world titles in six divisions and a potential box office showdown with Taylor should she be victorious tonight.

“I’m never going to be one to react to the talking,” Taylor said. “It is all just water off a duck’s back for me. It’s a lot easier to talk and a lot harder to go in and back it up in the ring. I like to be quietly confident in the ring before a fight and then do my talking inside it. It’s not the sort of person I am.

“I’m just focussing on what I’ve got to do but I think a lot of talking can be a sign of insecurity and a sign of lack of confidence. I just focus on my own performances.

“She is very experienced and hasn’t lost for six years. She’s coming here to win. I expect my toughest fight of my career but these are the fights I love – the challenge”.

Taylor will take comfort in the closeness of her Connecticut training base just a two-hour drive away from what she calls her “home from home”, here in Boston.

“There’s going to be a huge Irish contingent in the arena and I can’t wait. People seem to be excited about this fight, talking about [it]. This is everything that professional boxing is about – people need to be talking about fights, we need that public interest and this fight is getting it.”