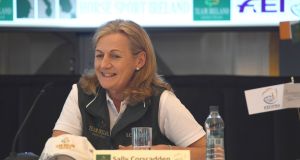 Ireland finished fourth in the final FEI eventing Nations’ Cup of the year held over the weekend at Boekelo in The Netherlands, where the win went to Germany but victory in the series was claimed by Britain.

The first three were clear in Sunday’s concluding show jumping phase and, with Bolger’s score being discarded, Ireland completed on a total of 120.70 penalties. In the lead throughout, Germany won on 94 penalties ahead of Britain (99.9) and Sweden (107.70).

Britain, who contested seven of the eight legs, went into this final round of the Nations’ Cup series trailing France by 10 points but came out of the weekend as winners on 570 points with France finishing second on 540. Germany were third on 420, narrowly ahead of Sweden (415). With the World Equestrian Games and qualification for the 2020 Olympics being the aims this year, Ireland competed at just three of the eight venues (which included Millstreet in Co Cork), finishing seventh (230).

Currently 10th in the FEI world rankings, Sam Watson finished in that position individually on Sunday with Vahe Bogossian’s nine-year-old dun gelding Tullabeg Flamenco (36.5 penalties). Germany’s Julia Krajewski took the honours on Samourai du Thot (22.60) ahead of Britain’s Laura Collett with London 52 (24.70). The home crowd were most disappointed when The Netherlands’ Tip Lips, who went into Sunday’s final phase in the lead, had two fences down with Bayro and dropped to third (27.20).

“It was a big learning curve for us here in Boekelo,” said Irish eventing team manager, Sally Corscadden. “We had a lot of young horses and it was really pleasing to see how they performed cross-country and in today’s show jumping. It is exciting to have some new horses and riders showing a lot of promise. It’s a real stepping stone for us and, on the whole, we are really happy with how we have performed.”

Brian Morrison and Declan Cullen, one of four other Irish riders competing at the Dutch venue, are now en route to Le Lion d’Angers in western France where they will join 10 of their compatriots to compete in the World breeding championships for young event horses. For the first time since 2012, Ireland will be represented by the full quota of three six-year-olds and 12 seven-year-olds.