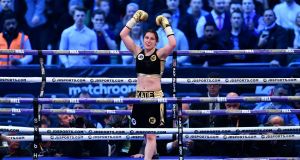 Katie Taylor hit another milestone at speed when she won the first professional title of her short career with a seventh-round stoppage of Germany’s Nina Meinke in London’s Wembley Stadium.

Scheduled as one of the earlier fights ahead of the World Championship bout between Britain’s London 2012 gold medallist Anthony Joshua and Ukraine’s Vladimir Klitschko, Taylor won every round in a deeply one-sided show, the referee finally taking pity on Meinke 57 seconds into the seventh round of the bout.

Played out in a partially full Wembley, it was the Irish Olympic champion’s first scheduled 10-round fight with the win giving her the Inter-Continental belt and moving her a step closer at a World title shot later this year.

“I’m ready to fight for a world title right now,” said Taylor afterwards. “I’m very excited. This has been the greatest night of my career.”

The 23-year-old southpaw Meinke, trained by former world champion Sven Ottke, claimed the first silverware of her career in her last fight with a round one stoppage over Hasna Tukic to pick up the IBF Youth Super-Featherweight title.

But Saturday was far from a repeat, where she was outclassed from the moment the first round bell sounded.

Taylor opened steadily, making use of her traditional left jab and began hunting her German opponent around the ring, landing stinging blows on target from the beginning.

Although wary of Meinke’s back left hand, Taylor found her distance early with combinations. By far the more aggressive, it was a case of Meinke backing off and defending herself from the high-tempo predatory approach of the Irish boxer.

In the third round she came out without her gum shield in her mouth, a sign of the pressure she was coming under and by round four Meinke’s face had begun to flush with abrasions around her eyes.

By then her eyes were beginning to swell, Taylor landing volleys of three and four shots, left hooks and the back right hand also finding the mark.

By the end of the fifth round the eye was a problem for Meinke as it puffed up badly. It was hard-earned money for the German, Taylor dominating every round and in the sixth maybe looking to finish it with some big left hands landing.

The seventh-round stoppage hardly came soon enough as the referee concluded that the action was simply too one sided and stepped between the two waving his hands and calling a halt.

Nothing other than a knockout could have saved Meinke from defeat, a prospect that appeared to diminish, not increase, as the minutes passed

Taylor is now five fights into her professional career without defeat and possibly without losing a round. She continues to move forwards in her fast-track towards a world title fight.

She has stated she would prefer that to be in Ireland, although the US is also being explored by her promoter Eddie Hearn and manager Brian Peters.

In a Sky interview after the fight Hearn said they were looking at an October or November date in Dublin.