Darragh Kenny off to a winning start in Shanghai 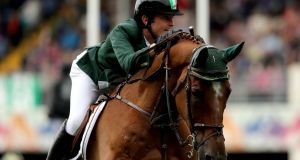 Ireland’s Darragh Kenny is in action in Shanghai this weekend. Photograph: Inpho

Ireland’s Darragh Kenny got off to a great start at the five-star show in Shanghai on Friday when winning the first Longines Global Champions Tour event of the weekend, a 1.55m jump-off class, having earlier placed second in a 1.45m competition.

The Co Offaly rider was one of 19 who progressed to the second round of the feature class where, riding Kerry Anne McCahill’s 10-year-old Dutch Warmblood gelding Charly Chaplin S, he recorded the fastest of 11 double clears in 38.87 to take the top prize of €51,150. Germany’s David Will finished in the runner-up spot on Mic Mac du Tillard (39.10), a 17-year-old mare by the Irish Sport Horse sire Cruising, while Jos Verlooy of Belgium placed third on Caracas (39.82).

The opening round of the competition also counted as the first round of the Shanghai Global Champions League and, with Kenny’s Paris Panthers’ teammate, the USA’s Jack Towell, also jumping clear on New York, their team is one of three on a zero score.

The squad of Dermott Lennon, Richard Howley, Paul Kennedy and Michael Duff finished sixth on 20 faults as, following jump-off, Germany won ahead of France and Belgium.

Two Irish riders are among the 59 starters in the four-star Rolex Kentucky international horse trials in the United States this weekend. After dressage, Aidan Keogh, who runs the equestrian products, clothing and boot company Tredstep from his south Co Dublin home, lies in equal 23rd place on Master Tredstep (48.6 penalties) while US-based Co Mayo native Tim Bourke is in 41st place with Luckaun Quality (57.2).

Both geldings are Irish Sport Horses as are Loughan Glen, the mount of Clark Montgomery who leads the field on 33.6, Cooley Cross Border, ridden by Kim Severson in third (41) and Fernhill By Night which is in fourth (41.3) under Elisabeth Halliday-Sharp. All three riders compete for the USA while Germany’s Michael Jung is in second with FischerRocana FST (37.1).

In dressage, Ireland’s Roland Tong, riding his own and Sandra Kirkpatrick’s Rybrook Ambience, scored 69.220per cent to place fifth in the Grand Prix at the three-star show in Saumur, France on Friday. This was a personal best international Grand Prix score for Tong and the 12-year-old Trento B gelding since they started competing as a combination on the big tour in 2015. The competition was won by Belgium’s Fanny Verliefden on Indoctro v/d Steenblok (72.980).

At home this weekend, the main eventing action takes place at Rosanna, Ashford, Co Wicklow on Sunday. There are 12 runners in the top-rated Connolly’s Red Mills Super League O/CNC2* class while many of the country’s top young horses have been entered in the Cooley Farms EI100 class for five and six-year-olds.

Thomastown, Co Kilkenny is the venue for two days’ of show jumping with the feature class being the Grand Prix sponsored by Mount Juliet.