Joshua may go for early win, but if Klitschko weathers the storm he could gain the edge 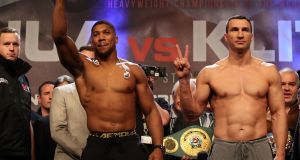 Groves was at Friday’s weigh-in bemoaning that his post-war record attendance had been trumped and promising that Saturday’s fight in front of 90,000 would not be close but that neither Wladimir Klitschko nor Joshua would dominate.

Joshua, with 18 wins and 18 knockouts, is a notoriously fast starter and if Klitschko can weather the first half of the fight, his respected jab and ringcraft could make it a tough night for the Londoner.

Joshua, at 17st 2lbs, weighed in 10lbs heavier than the Ukrainian, and for once his physique will be matched. Lennox Lewis, who was at the event in the Wembley Arena, commented that it was a lot of muscle to carry around for 12 rounds, suggesting stamina could be an issue if it goes the distance.

“That’s very heavy,” the former heavyweight champion of the world told broadcaster Sky. “That’s a lot of muscle to move around for 12 rounds. He has to watch his stamina.”

The subtext there is Joshua has not been past the seventh round and some educated views are that those rounds could be his winning or losing of the bout.

Joshua can box but Klitschko, a fellow Olympic gold medalist, can too and he has kept himself fresh. He is also in startlingly good shape and he has a jab to die for and that he will use to keep the bomb-throwing Joshua at bay.

Klitschko, at 17st 2lbs, is his lightest since 2009. Therein appears a tactic. Weather the storm and outlast the younger man. Brave.