Katie Taylor to bring substance and style for biggest crowd yet 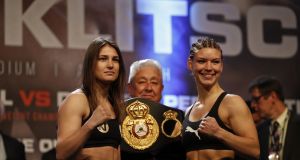 It was likely the first time that the 1,000 or so people who attended the weigh-in at the Wembley Arena ever saw Katie Taylor.

The yellow and blue flags and the Russian accents from many who had queued for hours to watch the boxers, strip, weigh themselves, pose for the cameras and complete a stare off, suggested the Ukrainian support for Vladimir Klitschko was maybe not equal to that of Anthony Joshua but just as vocal.

Taylor’s opponent, Nina Meinke, who is more stocky and low set, comes into this smoke-and-light environment for the first time. By contrast, Taylor is now almost a veteran of the pre-fight drama after four professional bouts.

This is Taylor’s second time supporting Joshua and she is one of four Olympic gold medal winners on the card, joining fellow London 2012 winners Joshua and Luke Campbell, while Klitschko won gold in the Atlanta games in 1996.

Friday was part of the sales pitch; even if precious few of the 90,000 Wembley seats remain available, there are pay-per-views to be sold.

“The pride of Bray,” howled the announcer, with 20 or 30 officials, coaches and celebrity boxers, including former heavyweight champion of the world Lennox Lewis, thronging onto the stage.

Taylor brought her earnest face and barely smiled, posing in a sports bikini that is probably not her preferred style. But if expressions can be read, Meinke was less comfortable and less accustomed to the flashing bulbs, the rings girls and the television cameras.

The prize too might have been on the German’s mind as the fight, scheduled for 10 two-minute rounds, is a WBA lightweight title eliminator.

There is no boxer in the world whose amateur record rivals Taylor’s and as the past three opponents have shown, toughness and heart aside, they are a class below the 30-year-old orthodox fighter.

Meinke’s best amateur run was two final appearances at the German national championships; against that stands an Olympic gold and five world titles.

The southpaw is professionally 5-0 to Taylor’s 4-0. But this is a step up in class for the Spandau native, who at 5ft 5in is the same height as her opponent and at 23 is seven years younger.

But the gulf in ability seems greater than age or winning stats and Taylor’s engine has been one of her strengths. Another one.

“I’ve only been a professional for five months and already been lucky enough to box on some huge events,” she said during this week’s build up. “But Wembley Stadium on the Joshua versus Klitschko card is going to be something else.”

It will and trying to pick holes is difficult. But Taylor has not been seriously hit by an opponent. That will happen at some point and how she reacts will be telling.

This is Meinke’s first professional fight outside Germany. It is a reach for her. A win would constitute a seismic shock.