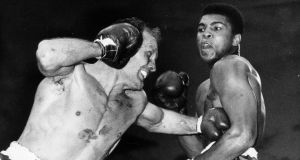 Muhammad Ali, then known as Cassius Clay, fighting Henry Cooper at Wembley on June 18th 1963. It was Ali’s final fight before he won the heavyweight championship of the world against Sonny Liston in February 1964. Photograph: Central Press/Getty Images

In 1993 Greg Haugen made what he may look back on now as one of the worst calls of his career.

As the stadium had originally been built for the 1968 Olympic football finals, the ring, constructed on the pitch, was surrounded by barbed wire and a moat to protect the fighters from the crowd.

In the light of American Haugen’s pre-fight comments, it wasn’t such a leap of faith to believe it might have been an insightful choice of venue.

Haugen’s insults targeted both Chávez and Mexico, accusing the world champion of only winning his last 85 fights because he’d fought “Tijuana taxi drivers” and suggested there weren’t 130,000 Mexicans who could afford a ticket into the stadium.

In a spiteful match Chávez dropped Haugen in seconds and to punish him further, deliberately drew out the fight to the fifth round, when it was stopped.

While Eddie Hearn’s promotion on Saturday night, the WBA heavyweight world title fight between Anthony Joshua and Wladimir Klitschko in Wembley Stadium, does not have the bloated numbers of the Chávez spectacle, the expected 90,000 fans will take boxing in this part of the world back to old school mass proportions.

Heavily promoted fights through the decades have always held a special place in the bosom of the heavyweight division of big men and big money, where proportions have always been inflated.

Henry Cooper and Muhamed Ali (then Cassius Clay) in Wembley 1963 and again in Arsenal football club’s ground in Highbury in 1966 were two parts of an epic of the day in London’s swinging Sixties.

In the first bout in front of 35,000, Ali was controversially helped back to his corner when one of Cooper’s ‘ammer’ left hooks landed. Ali was to comment after his victory that ‘Our Enry’s’ left “had hit him so hard that his ancestors in Africa felt it”.

Ali won in the fifth round, Cooper’s famously soft skin again his undoing. It was to be a feature of the Englishman’s career, which was amplified and celebrated by English fans even though he had 11 defeats scratched on one side of the ledger before he called time on his career.

Three years later world champion Ali was back in Britain for the second meeting, with 46,000 turning out in north London to watch if an essential journeyman like Cooper could become the heavyweight champion of the world.

Far from that, the image of the day on the front of the British tabloids was of a bloodied Cooper, the fight having been stopped in the sixth round when a quick right from Ali sliced open Cooper’s left eyebrow and the referee stepped in.

In 1985 tears flowed when Barry McGuigan beat Eusebio Pedroza at Loftus Road for the WBA featherweight championship. His father Pat sang Danny Boy as the anthem in Queens Park Rangers’ ground and 27,000 turned out to watch, 2,00 more than arrived to Croke Park to see Ali’s 11th round knockout of Al ‘Blue’ Lewis in 1972.

After 15 rounds and a unanimous decision McGuigan became the first Irish world champion for 35 years only to lose it the following summer to Steve Cruz in a converted Las Vegas car park.

In 1987 Frank Bruno and Joe Bugner would draw a crowd of some 40,000 to Tottenham’s stadium at White Hart Lane. Bugner, a Hungarian-born British-Australian heavyweight, soon discovered he had not been forgiven for beating the lovable Cooper in 1971.

Londoner Bruno’s original opponent, Trevor Berbick, had been forced to withdraw because of injury and the 37-year-old Bugner was lined up by Barry Hearn, father of Eddie, who is promoter for Katie Taylor and also this big Wembley show.

Bruno was 25, over a decade younger than Bugner. There is some similarity there with Saturday’s bout. Joshua, a 2012 gold medal winner in London is 27 and Klitschko, a superheavyweight gold medallist in Atlanta 1996, is 41.

Bruno, who had been called a c-grade fighter by Bugner, pleased his fans with a TKO in the eighth round. Bugner, who had lost to Ali in 1975 in a world heavyweight title decider, would fight nine more times before he retired in 1999.

A theme of stadium fights has always been about the mass following, the home fighter trading on his supporters who strongly identify with locality and nationality.

It was the London cockney in Cooper that drew the fans to the London football venues for his fights with Ali and the grandmother’s favourite and Hammersmith-born Bruno that coaxed them into White Hart Lane.

Ricky Hatton, an avid Manchester City fan, was able to galvanise the crowds and bring them to the City of Manchester Stadium in 2003 and Joe Calzaghe’s ‘homecoming’ fight following his first-ever defeat as a professional to Floyd Mayweather Jr, played the Welsh card for a Millennium Stadium bout with Mikkel Kessler in 2007. Around 55,000 fans put a hefty price tag on the purse for that one.

In more recent years Wladimir Klitschko defeated David Haye in the Imtech Arena in 2011, home to Hamburger SV. Ukrainian Klitschko has nurtured a dual nationality from his European base in Germany.

Warming to the lucrative takings from crowds of 45,000 in size, Haye met Dereck Chisora in Upton Park a year later. A fighter who thrives on being disliked by the fans and booed into the ring, 30,000 watched as he took on British rival Chisora in a grudge fight dubbed ‘Licence to Thrill’.

It is Hearn and MatchRoom who have revived the concept of the stadium show and massive draws with created animosities and grudges all part of the husbandry of hard sell, with giant HD screens, bars and food all part of the package these days.

The most recent massive attendance before this weekend was Carl Froch’s rematch with George Groves, billed as usual without understatement as ‘Unfinished Business’ and the ‘Rematch of the Century’.

Taking place in 2014 at Wembley Stadium, with Froch’s unified WBA and IBF super-middleweight titles on the line, Froch won the fight by KO in the eighth round.

Hearn is selling Joshua as under-cooked and trying to eyes from the great disparity in age between the fighters, which could be a critical influence on the outcome.

“I have to be honest, it is too early for Anthony Joshua – this is his 19th professional fight,” said Hearn.