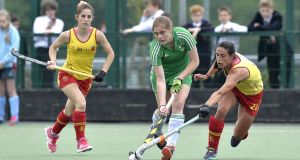 Ireland captain Katie Mullan: “I think the biggest thing we can take from the 2015 World League is a realisation of how different we are now as a squad.” Photograph: Inpho

Katie Mullan says the heart-break of the Olympic qualifying process in Valencia in 2015 remains the defining moment for the Irish women’s team.

Live on Sky Sports, for one rare moment, the green army had a rare moment in the public gaze with Rio calling. They pinned back the higher ranked China for an hour in Valencia, inches from glory. But 15 spurned penalty corners meant a shoot-out; the width of a post denied Megan Frazer a winner and the Chinese prevailed on sudden death.

The 23-year-old – recently named as the new captain – vowed such pain would not be endured again. It was to be ground zero for a new era, using it as the springboard. She says it has made the side “fitter, technically better, tactically better and much more experienced” to end the long wait to reach one of the sport’s major events.

Ireland, ranked 15th in the world, meet Japan (11th) on Saturday morning in the first of four group games in Johannesburg at the World League Semi-Final where the 2018 World Cup tickets will be decided.

Ireland have not qualified for the showpiece event since 2002 but will scarcely be in better shape to do so. After some soul-searching, the panel has emerged from that devastation to win the European ‘B’ division and cruised through January’s World League Round 2, scoring 39 goals and conceding just once in six games.

In addition, top-10 ranked sides like Korea and Germany - the current Olympic bronze medalists - have both been beaten in the past fortnight with Mullan scoring the winning goal each time.

It gives the Coleraine native a real feeling they can make amends this time around. “2015 was heart-breaking. I struggled following Valencia. We all did; I think part of the disappointment will never go away.

“I was only 21 at the time so I promised myself that I was going to be better equipped physically and technically if I I was lucky enough to be at another qualifier.

“I think the biggest thing we can take from the 2015 World League is a realisation of how different we are now as a squad.”

Four players retired in the wake of that tournament and Graham Shaw took on the coaching reins from Darren Smith. Teenagers Zoe Wilson and Lena Tice freshened things up while Roisin Upton’s return from the US where she won two NCAA titles with the Uconn Huskies allowed Mullan to move further up the field.

Unavailable On the flip side, Frazer is out long-term with a knee ligament injury while Cliodhna Sargent, Rebecca Barry and Naomi Carroll also are unavailable for this tournament.

Despite their absences, coach Shaw has seen his side continue to impress in their preparations for this main event.

“Beating teams in the top 10 in the world gives you that belief,” Shaw says. “On any given day, if we perform to our best, we can be a real threat to any team in the world right now.

“You don’t want to look too much into the results pre-tournament but we have certainly grown as a group with positive results building confidence.”

As for their 2018 World Cup hopes, that event expanded to 16 teams from 12. To qualify automatically from Johannesburg, they need to finish in the top five sides.

The top four of the five-teams in the group go through to the quarter-finals with the game against Poland a must-win, sandwiched between ties against Germany and the Olympic gold medallists, England. Win a quarter-final and the ticket to the World Cup is assured; lose and they go into the fifth to eighth place playoffs.

Every game in those ties will remain important as even a sixth or seventh place finish look likely to earn a World Cup place, dependent on how the continental championships play out.