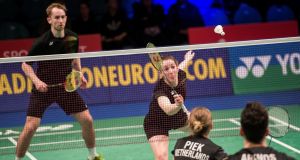 Ireland’s Sam and Chloe Magee in action during their mixed double match against Jacco Arends and Selena Piek of Netherlands. Photo: Reuters

Chloe and Sam Magee have created history by claiming Ireland’s first medal at the European Badminton Championships in Denmark.

The Raphoe, Co Donegal siblings have been a revelation this week, beating the fifth seeds and former bronze medallists in the first round and then accounting for a dangerous French pairing on Thursday.

That left them with the 2012 mixed doubles champions, Polish pair Robert Mateusiak and Nadiezda Zieba standing between them and the elusive medal.

They showed real steel in the first game, saving two game points and scoring four points in a row to prevail and while they were unable to finish it in two, they streaked away in the third.

“I just can’t believe it” beamed Chloe Magee. “It’s just so very, very good to get over the line.

“We were good in the third set and got a bit of control to go 11-2 up but we knew it wasn’t the end of that match and we really wanted that medal. You’re never really secure, even at 11-2.

“It was all about staying in the moment but that’s very hard sometimes! I think we did it at the end of the match. They got it back to 18-12 and I think they were the three hardest points of our lives.”

The Magees will now cross swords with top seeds Joachim Fischer Nielsen and Christinna Pedersen, who are chasing their third gold medal in a row and will have a vociferous home crowd in their corner.

But having achieved their lifetime goal already, there will be no pressure on the Irish pair.

“We wanted to get that medal and we knew we had a good draw if we played well enough. But we had the number five seeds in the first round so could easily have lost there.

“Now we’re in the semi-final we can just go for it.

“The aim, the goal was a medal. I think our whole career, that was our aim, winning a medal and we’ve done that today. It’s really good when there’s a guaranteed bronze but we can go out there now and really show how good we are.”