Anthony Joshua a picture of calm ahead of Wembley war

British fighter says ‘I want to knock him out, but I don’t hate him’ of Wladimir Klitschko 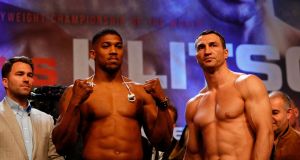 Anthony Joshua and pose during the weigh-in ahead of their world heavyweight title unification bout at Wembley. Photo: Adrian Dennis/Getty Images

Anthony Joshua laughs a lot. After all, he has much to be happy about. He is widely regarded as the best young heavyweight in the world, the future of boxing, we are reminded by those with a financial interest in his unbeaten progress at Wembley on Saturday night, an Olympic gold medallist and multimillionaire at 27 with celebrity friends, a posse and a back story.

This “fine young man”, as he is often and correctly described, is an entrenched hero of British sport, getting ready to test his spirit and skill against one of the all-time greats in front of 90,000 fans. So he laughs, and it is infectious. Even the stone-faced Wladimir Klitschko, who now plots to destroy him, laughs with him.

Scared men often let laughter hide their anxiety, but there is a scary calm about Joshua that seems genuine. He is always like this. “I like to be around familiar faces. It keeps me relaxed,” he says. “I don’t want to build up too much unnecessary energy. Believe it or not, stress is as big a killer as anything. When I’m walking out to the ring, that’s when I let the energy build up. When it’s time to switch on, I definitely switch on.”

But the first punch does not necessarily mean an explosive release of tension for him. His trainer, Robert McCracken, has encouraged measured power, control and clear-mindedness for every second of the fight. For all the lightheartedness of the build-up, neither fighter will fully relax until the job is done. “When you win,” Joshua adds, “it’s a release, and your eyes are open to everything. When you’re fighting it’s intense.”

At the weigh-in at Wembley Arena on Friday, he looked ready for a collision rather than a dance, weighing a career-high 17st 12lbs, fully 10lbs heavier than a challenger who is 14 years his senior.

“You’ve got to take the fight round by round,” Joshua said when asked if he might have been better to come in lighter and use his movement, adding: “I want to knock him out. But I don’t hate Klitschko, I don’t dislike Klitschko, I want to beat Klitschko. For now it’s tunnel vision.”

Dr Steelhammer, who has a degree in sports science, will digest the fact that Joshua has chosen bulk over sleekness – although he did in his last fight, too, when he blew away the American Éric Molina. “It really doesn’t matter,” Klitschko said. “I will go round to round. I wish him good luck.”

The former world champion Lennox Lewis, who began his professional career at 16st 7lbs and was nearly two stones heavier in his last fight (against Wladimir’s brother, Vitali), thinks Joshua will win but cautioned: “That’s very heavy, a lot of muscle to move around for 12 rounds. He has to watch his stamina, make sure he can go in there and box. He better have a Plan B. I’ve never seen Klitschko in this kind of shape.”

Joshua will need all his focus because he knows, behind the grin and the strained bonhomie, that the ring is no place for levity. And that is why the chess-playing Klitschko, who has wiped the smile from 64 faces in 68 bouts stretching back to 1996, will have wondered about Joshua’s demeanour in recent days. Is that a nervous laugh he hears? Is this amiable prince playing games with him? Is there something he is yet to learn about Joshua, even though they have sparred many times?

All is not as it seems. When they faced off the previous day, Sky miked them up. Joshua turned his off and whispered: “I’m going to hurt you.”

Those who know Joshua best will testify that he has always been jovial but iron-minded, even in the dark teenage days in Watford when a life of drug-dealing on the streets tugged at his sympathies before he found a sport that could accommodate his wild side. (Those dire memories seemed distant on Friday when Joshua took delivery of a Range Rover made to his specifications).

Away from the cameras, he is similarly light-hearted, and it is a joy to witness; boxing is heaving with sadness, bitter feuds, disappointment, tragedy, cynicism and gross behaviour. Muhammad Ali was the last heavyweight to properly illuminate his sport, lifting it on to a higher plane of entertainment. Joshua can spread his own kind of light – if he wins.

Nevertheless, their happy-happy pre-fight press conference at Sky’s HQ in west London on Thursday provoked predictable sniggers among the gnarled boxing writers. This was bringing boxing into disrepute. What would David Haye make of it all? Mike Tyson would be turning in his hood.

The British Boxing Board of Control secretary Robert Smith, meanwhile, was relieved to answer questions that did not dwell on bottle-throwing, table-tossing acrimony.

“I’m very happy,” he told Sky. “You always contact me when things have gone wrong, so it’s a nice change. Both boxers, and the whole card, have behaved themselves impeccably. They’re a credit not only to the sport in their own countries but to the sport across the world. This is what boxing can do for people. These are the role models we want youngsters to see so they can decide if they want to get involved in the sport.

“I don’t think any fight needs trash-talking, and this was sold out very quickly. It’s an intriguing match. Wladimir is coming towards the end of his career, which obviously he knows, and Anthony is really at the beginning of his career.”

Yet, for all that this promotion has lacked spite, there is a detectable undercurrent of danger. It is two-way peril, as well. Tony Bellew, who recently survived David Haye’s best insults and uppercuts, insists: “There is a way back for either man.” Maybe. Certainly Joshua would not be crushed by losing. He is only 27 and has won all his 18 fights by stoppage. Not many promoters would be queueing up to recycle the machine-like Klitschko, though, if he suffers his second defeat in a row to a British heavyweight.

It is easy to imagine the mayhem if this were the scheduled rematch for Klitschko against Tyson Fury, who unsettled him long enough to take his WBA belt in November 2015. An all-British Joshua-Fury showdown at the same venue next summer would generate even bigger numbers than this event is said to be gathering: £40m in revenue, with the fighters splitting three-quarters of that.

Matchroom has a hold on this territory now. The hyped grudge reprise between Carl Froch and George Groves set the bar, and Eddie Hearn keeps reaching for it. He wanted to pit Kell Brook against Amir Khan here, but events and ego intervened. This deal, though, was easier to seal: between a young lion unafraid to test himself against an old dog who is willing to risk a losing farewell in pursuit of one last grab at the crown.

Klitschko did not take kindly, however, to my suggestion that he might have retired had he beaten Fury, and that maybe he was only fighting on to repair the damage that low-key performance inflicted on his reputation.

“Wrong question, wrong timing,” he said with a cold stare. “I have never looked further than my next fight. You go from fight to fight as long as your health is good and your motivation is there. If one of those two is missing, you’re done. That’s been my attitude for more than a decade now.”

Klitschko will go to the ring convinced he can hand Joshua a boxing lesson, although the evidence of recent years is not convincing. Joshua thinks his venerable opponent’s best years peaked in 2005. Inspection of his CV after he stopped Chris Byrd that year supports the theory that, as he developed a stand-off style that made best use of his size and power, he threw fewer punches, took fewer risks.

In 19 bouts since that win – the overwhelming majority against safe opponents – Klitschko has understandably boxed more conservatively. While he is still dangerous and 14 of those opponents did not last the distance, 12 got past halfway - and one had his hand raised at the end.

As Smith observed of Fury, Klitschko’s only conqueror in the past 13 years: “At the present time he is still suspended. He’s got a hearing in the beginning of May. We’ll have to wait and see what happens.”

The odds are, Klitschko will not be getting a rematch with Fury, even if the Mancunian is in any shape to accommodate one before Christmas. More likely, as the bookmakers recognise, Joshua will leave smiling again after his 19th win, probably around halfway. In a quieter moment this week, Joshua said: “If this gets tough, I will slug it out. If I don’t come out there the same person I walk in, I don’t mind. I’ll go to war.”