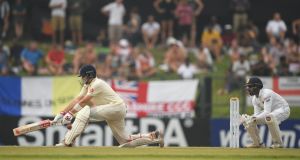 A brave and brilliant century by Joe Root has given England the chance of a famous victory in a compelling Test match in Kandy on Friday.

The England captain’s innings was brave not because he was ever in any physical danger – no pace bowler propelled a ball at him until the 55th over – but because the conception of this knock and the approach of the entire England line-up was so unusually bold and risky.

They swept and they scurried and they swept again. Their first seven batsmen were all out sweeping, which can easily prompt old-timers to rail against the modern way. Thus they risked severe censure from the wise men in the boxes if their strategy failed abysmally. It did not. They have scored 324 for nine.

In the 20th century the sweep was often the stroke of last resort; here on a pitch that still offered prodigious turn, though seemingly more slowly, it became the first port of call for just about every English batsman. Had the line-up failed then everyone from Root and Trevor Bayliss would have been castigated. Both have been brave enough to accept that possibility and to carry on regardless.

And the brilliance? Well, this simply relates to the execution of the plans, primarily by Root, but with important contributions from Rory Burns, Jos Buttler and Ben Foakes. Root swept with such amazing precision and power. Somehow he seemed to be hitting the ball with a hint of top spin as it sped away to deep mid-wicket or square leg – or to deep backward point when he employed the reverse sweep with equal facility. Of course there were other strokes: occasionally a forward defensive or a straight drive and there were two perfectly struck sixes despite several boundary fielders, one to mid-wicket off Dilruwan Perera, another gun-barrel straight off Akila Dananjaya.

This was Root’s 15th Test century, which puts him alongside Jack Hobbs who had 102 innings for England and Alec Stewart (235) on the list of centurions – this was Root’s 140th knock in Test cricket. Among England cricketers in this century only Kevin Pietersen – in Mumbai and Colombo in 2012 – has played innings of such stunning audacity in Asia in a situation where the match is in the balance.

Any suggestions that the captaincy sits heavily upon Root’s shoulders – and there have been plenty of those – can be shelved for a while. On this tour in particular Root has seemed more relaxed and authoritative in his leadership role. Along with his coach they have been guided by the principle of “when in doubt take the aggressive option” and they have stuck to it. This mantra may lead to a series victory; it has certainly provided some mesmerising cricket.

The Sri Lankans were only allowed to bowl two maidens in the day and one of those was in Perera’s opening over at the start of proceedings. Burns delivered his highest and best innings for England so far (59) and it feels like there could be many more. After the early departure of Jack Leach he personified the determination to attack. He judged the length of the spinners adeptly and this allowed him to cut (and sweep, of course) with remarkable freedom – and daring. He set the pattern as England scored 87 runs in the first hour.

Keaton Jennings was caught at slip, reverse sweeping for 26, and then both Burns, for 59, and Ben Stokes, for a second ball duck, were lbw playing that shot. It became significant that both Burns and Stokes opted to review their dismissals to no avail since both Moeen Ali and Adil Rashid were later victims of incorrect decisions, which they were unable to send to the third umpire.

Next Buttler added 74 with Root and as the partnership developed it was England’s captain who played the more dashing strokes. Buttler made 34 but such was the ease of his timing he promised more; he is tormenting the Sri Lankan spinners but not for long enough. Moeen slog swept his second ball for six before becoming another lbw victim, but once again Foakes displayed a calm head and a sure technique. He was there for a celebratory embrace when Root glided a delivery from Suranga Lakmal down to the third man boundary to reach his century.

Eventually after adding 82 with the admirable Foakes, the captain was the seventh man to fall sweeping, against Dananjaya. The pattern was broken when both Sam Curran, out first ball, and Rashid were dismissed playing backward defensive strokes – though Rashid, given lbw, had touched the ball with his bat.

Now Foakes, alongside James Anderson sped to his half-century with a six, the last shot of the day. Suddenly from the leafy hills beyond came a thunderstorm of considerable velocity. By then England led by 278 runs. On the first day we would have concluded that this was more than enough. We are not so sure now. - Guardian