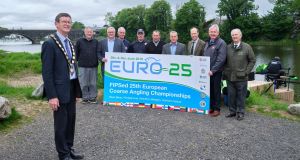 Partners and sponsors at Portglenone on the Lower Bann, ahead of the European coarse fishing championships.

The National Coarse Fishing Federation of Ireland (Ncffi) is gearing up to host the 25th Fédéracion International de la Pêche Sportive European Championships later this month on the lower river Bann in Mid Ulster. This will be the third occasion for Northern Ireland to host an event of this calibre since the world championships were held on the river Erne in 1992 and Newry canal in 1982.

The four-day event will be staged around the communities of Portglenone and Bellaghy in the Bann corridor where teams representing 18 nations will bring a welcome boost to the local economy.

Significant investment from Waterways Ireland, Mid Ulster District Council and local landowners has led to the enhancement of the coarse fishing facility to support an angling event of this size.

Teams will train from Monday 24th to Friday June 28th and the competition will be played out on Saturday and Sunday from 10am to 2pm, finishing with a closing ceremony at the GAA Hall in Bellaghy at 7pm.

Enthusiasts will have the opportunity to watch top rods in action including England’s Will Raison and Hungary’s Tamas Walter, as well as team Italy, currently ranked number one in the world.

The Ncffi is appealing to all communities for help in stewarding with 100 volunteers required. If you are available on the Saturday and/or Sunday, please visit ncffi.ie/euro25 for more details and to register.

On a sad note, Ncffi reports the passing of Robert Buick, one of its stalwart members who, among many of his attributes, founded the East Belfast Angling Club in 1972 and played a major part in the enhancement of Ncffi to the 32-county federation it is today.

His love of canals saw him regularly travel to Enfield, Edenderry and Prosperous to compete and frame in open competitions and festivals. He also championed the development of Mid Ulster’s coarse facility on the lower Bann at Portglenone, the venue for this month’s championships.

Oliver McGauley, Ncffi president, said: “Robert has been key to the federation dedicating his life to our sport. This is a sad loss to the angling world but we hope that his legacy will live on.”

Two anglers recently appeared at Clifden District Court on charges relating to illegal fishing methods on the Cong river and fishing during the closed season. Both defendants represented themselves and pleaded guilty to stroke-hauling (using a weighted instrument with a rod and line to foul-hook fish) and fishing out of season.

One defendant also pleaded guilty to a further charge of obstruction under Section 301 (7) of the Fisheries (Consolidation) Act 1959.

Judge Mary Fahy stated that if both defendants paid costs of €600 each to the court, she may deal with the matter by way of a somewhat reduced fine.

Mixed week on the Corrib

On Lough Corrib, angling pressure has eased of late due to weather conditions and tapering off of mayfly hatches, however, caenis fishing is still producing fish, according to fisheries officer, Declan Gibbons.

In the Oughterard area, Basil Shields of Ardnasillagh Lodge had a quieter week than of late with Julie Cook from New Zealand landing four trout over two days and a group of three from Soldirini Tackle in Italy boating seven for their day.