Mo Farah targeting another record run on the Antrim coast 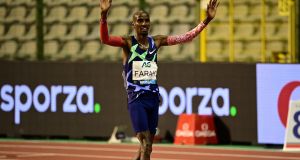 Billed as the fastest half marathon field ever assembled in Northern Ireland, the only worry for the race organisers is whether or not it will be fast enough for Mo Farah.

The four-time Olympic champion is making his first appearance at Saturday’s Antrim Coast Half Marathon, organised by Larne Athletics Club, and Farah has set out his ambition to break his own British half marathon record of 59 minutes and 32 seconds, set five years ago.

Although now aged 37, Farah is showing little signs of slowing down. Last Friday night, at the Brussels Diamond League, he set his first official outdoor world record on the track, improving the One Hour running mark with his total of 21,330 metres, which beat the Haile Gebrselassie’s previous record by 45m, set back in 2007.

Originally meant to be a mass-participation race last March, Covid-19 means Saturday’s race is now elite only, and travel restrictions had further restricted the chance to bring in pace-makers with the ability of taking Farah on sub-one hour pace.

He’s actually run 59:07, at the Great North Run, although that doesn’t count for record purposes. The plan is to have bicycle pace-makers to help keep Farah on record pace, although either way elite race organiser James McIlroy, the Larne runner who represented Ireland and then Britain over 800m, is predicting fast times all round.

“Most of the top runners from Britain and Ireland are here, around 15 Olympians, from five different Olympics,” says McIlroy. “And after all that’s gone on around Covid-19, it’s about doing something for the community, and we’ve had great support from the local council, from Northern Ireland athletes, from Irish athletes, English athletes, they’ve all bought in.”

Given the lack of competitive road races since the lockdown, Stephen Scullion and Kevin Seaward, both already qualified to run the Tokyo Olympic marathon for Ireland, will make full use of the competition too. Scullion has a best of 63:36, Seaward’s best is 63:39, with other Irish interest in Hugh Armstrong (64:29) and Gary O’Hanlon.

The Irish half marathon record won’t be easily broken, however, Alistair Cragg clocking 1:00:49 in 2011, although the fastest run on the island of Ireland by an Irish runner is still the 62:29 clocked by Jerry Kiernan in 1982. The other leading British runners include Scott Overall, Nick McCormack, Marc Scott and Ben O’Connor, with Gemma Steele, who has run 68:13, expected to set the pace in the women’s race.

Given the Covid-19 restrictions and social distancing, the elite men’s race will also be broken in two starts on Saturday morning at 8.15, and 8.16, with the elite women off at 8.0am. The race is being streamed live on the BBC Northern Ireland website and also at the race website at www.antrimcoasthalfmarathon.com.