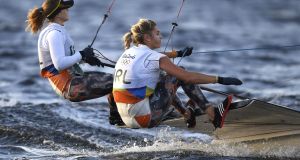 As the new Olympic quadrennial gets under way, Irish veteran Saskia Tidey has started training with Team GBR, with the goal of representing Britain in the women’s 49er FX skiff event at Tokyo 2020.

The 23-year-old qualifies for British citizenship through her father and she will be sailing with Charlotte Dobson, who also competed at the Rio 2016 Olympics.

After 12 years of competition in the Laser Radial and, more recently, the 49er FX, Tidey’s previous sailing partner, Andrea Brewster, announced that she is now moving on to coaching at international and Olympic level.

The pair placed 12th overall in Rio and narrowly missed out on a place in the medal race final. Dobson, sailing with Sophie Ainsworth, placed eighth overall.

The 49er FX skiff event made its debut at the 2016 Olympics, following the men’s 49er skiff introduction at the Sydney 2000 games.

“Once a class becomes established, experience counts more than anything else,” Tidey said this week. “I think that myself, along with Charlotte Dobson, gives us a strong combination going forward to achieve what we both individually want.”

Tidey said that the Irish Sailing Association (ISA) and Irish Sports Council have invested money and time in developing female helms in Ireland, but only in the Laser Radial and 420 classes.

Neither body supported her decision, but nor did they attempt to block the move. Tidey also made it clear that there was no suggestion of Team GBR approaching her to make the move.

“It’s regrettable that Saskia has decided to pursue her sailing career with another country but, that said, the ISA wish her the best of luck with her future endeavours,” said ISA performance director James O’Callaghan. “She’s a good example of what can be achieved from a managed programme as she came up through the academy and, along with Andrea Brewster, put in a fantastic performance at the Rio Olympics. We were hoping to build on that, but it’s not to be.”

Ireland currently has in prospect multiple campaigns for national places in the men’s 49er skiff team as well as in the men’s and women’s single-handed Laser classes.

“There wasn’t an option here in Ireland in the 49er FX with another girl who had the experience to sail at the same level that I had finished up at [at Rio 2016], to be competitive and win a medal in 2020,” Tidey said. “The 49er FX is a very specific boat and it takes a vast amount of time and commitment, full-time commitment, to even get to the level we got to.”

Tidey reckons that Ireland’s chance of bringing on a 49er FX pairing with girls developed at youth level is a very realistic possibility, but she cautioned against any expectations of podium results immediately.

“Now that the bar has been set so high at Rio, it will take two cycles – eight years – for a new combination to crack this class,” she said.

The Royal Yachting Association in Britain recently announced that it had secured the equivalent of €30 million for the new quadrennial to compete in all 10 Olympic sailing disciplines and seek to continue Britain’s status as the most successful nation in the sport.

That financial resource has also been a part of Tidey’s decision, after the financial burden of the past three years, which was, she said, a distraction from the Irish duo’s performance goals.

“It’s not been easy personally for me,” she said. “I’m so proud to be Irish, I will always be Irish, and I absolutely couldn’t have been prouder to represent Ireland at Rio 2016.

“I’m grateful for what has happened, but now [am looking forward to] four years of 100 per cent focus on performance.”