Williamson turns the screw after England collapse in Auckland 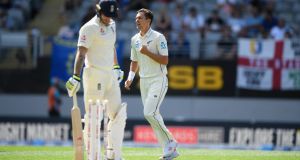 A pink ball and even pinker faces. England’s finest were skittled inside 21 overs for 58, their lowest ever score against New Zealand and if there had not been a last wicket partnership of 31 between Craig Overton and Jimmy Anderson they might have dismissed for their lowest score ever in Test cricket, which now remains at 45.

Having been put into bat on a cloudless afternoon, England were tormented by some exemplary bowling by the left-arm paceman, Trent Boult, who finished with 6-32. At the other end Tim Southee took four wickets in a variety of ways, which only served to highlight the ineptitude of England’s batsmen. There was some movement for Boult, in particular, but it was as if the batsmen were playing blind man’s buff after someone had mischievously plastered glue on the soles of their boots.

Many of the batsmen looked as if they could not see the pink ball and, perhaps as a consequence, their feet declined to move anywhere. Hence there was the ugliest of processions as England crashed to 27-9 in the 16th over.

Boult took his wickets in a manner that he might have anticipated in his dreams. He found the outside edge of the left-hander’s bat with swing that was sufficient rather than extravagant. Then he beat the inside edge of the right-handers to demolish their stumps. So Alastair Cook and Dawid Malan groped and edged but the most coveted wicket for Boult was surely that of England’s beleaguered captain.

Joe Root had surprised us at the toss by announcing that he was batting at three after England had unexpectedly opted to play Overton instead of James Vince. Root has never been enamoured by the prospect of batting at three and his experience yesterday may not have changed his view. Vince, meanwhile, could not dare to be spotted smiling after witnessing the carnage as a water carrier – not that any England batsman lasted long enough to justify needing refreshment.

Root faced five deliveries from Boult without alarms. His sixth was full and it swung into the batsman in classic fashion; it was a fine delivery – but not an unplayable one – and it passed between bat and pad to demolish the stumps.

Nine months ago there was much purring about England’s potent “engine room” of Ben Stokes, Jonny Bairstow and Moeen Ali. This trio could not contribute a run between them. Stokes, myopically searching for the first non-white cricket ball he has encountered for an awfully long time, was bowled by another zinger from Boult. He was late and his bat was crooked.

However his dismissal was no less exasperating than those of Bairstow and Moeen. Both succumbed to Southee in embarrassing fashion. Bairstow, who has been so dominant against the white ball recently, essayed a firm-footed drive to give a straightforward return catch, while Moeen missed a slowish full toss, which hit the base of his stumps, two gifts for Southee.

With the departure of Woakes, who was bowled by Boult just as Root had been, the statistical gurus were alerting us to all sorts of nasty records on the horizon, most of which started with “This is the worst/lowest …” When Stuart Broad was spectacularly caught by Kane Williamson in the gully off Southee (is he England’s unluckiest batsman as well as bowler?) the score had sunk to 27-9.

Most of the humiliating records were averted thanks to a cameo from Overton, who seemed to be able to pick up the pink ball rather better than his colleagues. There was one superb flat-batted six off Boult as well as a few, crisp drives in his unbeaten 33 but Anderson could not keep him company for long. Despite that last wicket partnership, England could not reach their previous lowest score against the Kiwis, in 1978 when Geoffrey Boycott was captain. We can safely assume that the wicket was misbehaving more then.

New Zealand soon demonstrated that it was perfectly possible to combat the pink ball at Eden Park against a stunned England, who shunned two early  opportunities in the field. Tom Latham could have been run out from the first ball of the innings but the throw of Liam Livingstone, briefly on as a sub, missed the stumps. Jeet Raval, facing Broad, was soon dropped at second slip by Root, who was distracted by the sight of Malan diving in front of him.

So Broad had to wait another 30 overs for his 400th Test wicket, though such was England’s plight he did not muster a smile, which seemed the appropriate response. Straight after dinner Latham, who had battled patiently, clipped a full ball straight to Woakes at square leg. Meanwhile Kane Williamson had progressed with characteristic diligence but when he was on 64 the England players were convinced that he was run-out. A firm straight drive from Taylor hit the stumps at the non-striker’s end and Woakes was convinced that the ball had brushed his fingers first with Williamson stranded. The replays watched by the third umpire, Marais Erasmus, were inconclusive; in fact Bruce Oxenford, unpiring out in the middle, had a better view. So Williamson survived but he soon lost Taylor caught at mid-wicket off Anderson.

At the close England were in more disarray than they ever experienced in Australia a few months ago. Stokes, despite all the optimistic noises coming from the England camp before the Test, was not only runless but also wicketless, since he was not fit enough to bowl a ball. At 175-3 with the unflappable Williamson unbeaten on 91, New Zealand were in the pink, England in despair.

Rory McIlroy pleased with first start as he eases into 2020 05:00
Men in Black: The referees for Ireland’s Six Nations games 05:00
Racecourse betting ring rallies in 2019 with increase in turnover 01:00
Niall Quinn and Gary Owens reassure FAI staff about future 01:00
Sizing John set for return to fences in Irish Gold Cup 01:00
Here is your handy guide to sport on television this week