Competitors fall like ninepins in ‘Championships of a Thousand Disqualifications’ 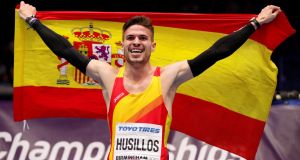 Granted, it was hard enough to see the telly over the weekend what with the stockpile of sliced pans in the living room, but where would we have been without it?

Some of us even watched Burnley v Everton, that’s how grateful we were for anything to pass the time until the thaw set in and we could stop living on Spaghetti Hoops sandwiches.

For once, though, Eurosport’s extensive offering of skiing-type activities failed to take the breath away, for example Kranjska Gora in Slovenia, venue for the men’s World Cup slalom event, looking winter-wonderland-lovely, but no different to, say, Ballymore Eustace or Blanchardstown the past few days. Besides, who among us wanted to watch snow on our tellies when there was more blocking the front door than there was on that mountain?

The wisest people were, of course, those who chose to do their sporting thing under a roof and in a heated room, and as luck would have it our national incarceration coincided with the World Indoor Athletics Championships.

Mind you, getting to the Birmingham venue proved a challenge for some, like Britain’s Laura Muir who spent £1,500 on a seven-hour taxi trip from Carlisle.

It paid off, Muir won bronze in the 3000m, then silver in the 1500m, although in the latter race you’d have thought she’d collected gold, Steve Cram not appearing to notice that Genzebe Dibaba actually crossed the line first.

Some viewers might have wished they’d got a taxi to Birmingham too because they’d have had a fair chance of coming home with a medal, it being ‘The Championship of a Thousand Disqualifications,’ as Andrew Cotter put it.

If, for example, you’d just walked between the lines of your lane in one of the men’s 400m heats you’d have won, every other contender disqualified, one for a false start, the other four for lane infringements.

Come the final, Cotter assumed everyone would have learnt to stay in their lane. Soon after its completion….

“Oscar Husillos, with that long-awaited Spanish gold and new European record, has been disqualified for lane infringement. Luguelin Santos thought he had the silver but he’s been disqualified too. We thought Michael Cherry had stepped on the line but he’s up to silver and Pavel Maslak as it stands has the gold having finished third. Deon Lendore, who was fifth, takes bronze.”

You could only feel sorry for Aldrich Bailey Jr who finished last but only ended up fourth.

Andrew then went for a lie down.

“People just saw a race, but the result did not reflect what they saw,” said Michael Johnson, and he wasn’t wrong.

It was all a little VAR-ish, having to press pause on your applause. And what happened poor old Elliot Giles nearly had the BBC team in tears. He finished fourth in the 800m final and was gutted. Then the fella who pipped him to bronze, Drew Windle, was disqualified so Elliot was over the moon. And then Drew was reinstated so Elliot was left medal-less.

“It’s quite surreal,” he told the BBC, although he probably hung around for a while on the off chance he’d end up with gold.

Christian Coleman had no such problems, the American running in a straight line to win the 60m in 6.37 seconds, his day’s work over rather speedily. How did he become so fast?

“His parents said when he was two he used to be frightened of the hoover, when he ran away they knew he was going to be quick,” Cram explained. “He’s going to be cleaning up gold medals in the future.”

Those who called for Cram to be sent back to commentating on curling were just being unkind.

On to Sunday and it was Brighton who hoovered up any hope Arsene Wenger had of finishing an apocalyptic week with a win. Or even a draw.

“Is this the end now,” Alan Parry asked when they went 2-0 down, Graeme Souness noting back in the studio that the same question has been asked for nigh on 10 years. Groundhog Day, like.

Even before the Brighton defeat Paul Merson had delivered the ugliest of blows to poor Wenger when he said: “They’re Everton. Arsenal are Everton.”

A truth as unpalatable as a Spaghetti Hoops sandwich.