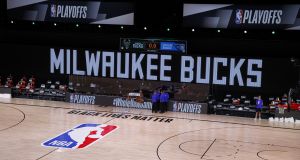 The court lies empty after the Milwaukee Bucks boycott their play-off Game 5 against Orlando Magic in protest at the shooting of Jacob Blake. Photograph: Kevin C Cox/Getty

In an extraordinary day in the NBA, the Milwaukee Bucks have boycotted Game 5 of their playoff series against the Orlando Magic in protest at the police shooting of Jacob Blake earlier this week.

ESPN later reported that Wednesday’s other two playoff games – between the Oklahoma City Thunder and the Houston Rockets; and the Portland Trail Blazers and the Los Angeles Lakers – had also been postponed. The games are expected to be rescheduled for a later date.

Blake was shot in the back by police, apparently in front of his children, on Sunday, and his family say he is now paralyzed from the waist down. The shooting occurred in Kenosha, Wisconsin, which is 40 miles from Milwaukee.

The Bucks had been due to come on court for 4pm ET on Wednesday afternoon, but did not emerge from the locker room. “We’re tired of the killings and the injustice,” Bucks guard George Hill told The Undefeated’s Marc J Spears.

Members of the Bucks have spoken about problems of racism and police brutality in the Milwaukee area before. Peter Feigin, the Bucks’ president, offended some fans in 2016 when he said Milwaukee is “the most segregated and racist place” he had known. Meanwhile, in an interview last year, former Bucks player Malcolm Brogdon spoke about similar problems.

“Before I came to Milwaukee I’d heard the city was the most segregated in the country,” he said. “I’d heard it was racist. When I got here it was extremely segregated. I’ve never lived in a city this segregated. Milwaukee’s very behind in terms of being progressive. There are things that need to change rapidly.”

There have been protests in Kenosha since the shooting, and police arrested Kyle Rittenhouse, 17, after two people were shot dead at a demonstration in the town on Tuesday night.

Wednesday’s boycott recalls a similarly troubled time in US history following the brutal beating of Rodney King, a black man, by white police officers in 1991. The Chicago Bulls player Craig Hodges wanted his team, along with their opponents the LA Lakers, to boycott the opening game of the NBA finals so “we would stand in solidarity with the black community while calling out racism and economic inequality in the NBA, where there were no black owners and almost no black coaches despite the fact that 75 per cent of the players in the league were African American”.

In 2017, Hodges said he regretted his failure to persuade the teams not to boycott.

“Our generation dropped the ball as a lot of us were more concerned with our own economic gain,” he said. “We were at that point where branding was just beginning and we got caught up in individual branding rather than a unified movement.”

Magic players were practising on court prior to what they thought would be the start of the game but left shortly after they learned the Bucks would not join them.

The Bucks lead the best-of-seven series 3-1 and are one of the favorites to win the title. Their star player and reigning league MVP, Giannis Antetokounmpo, was named NBA defensive player of the year on Tuesday.

This season’s playoffs are taking place in an isolated bubble at Florida’s Walt Disney World due to the Covid-19 pandemic.

1 Autumn Nations Cup - Ireland v Georgia: TV details, kick-off time, team news and more
2 Klopp warns players not to use his complaints over schedule as an excuse
3 Jackie Tyrrell: Waterford have a free pass but Cody just doesn't lose semi-finals
4 Buckley and Sligo ready to throw down gauntlet to the champions
5 Mourinho claims spending brings pressure as he travels to Chelsea
Real news has value SUBSCRIBE