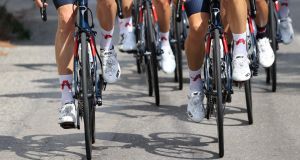 Teams will only be withdrawn from the Tour de France and subsequent Grand Tours this season if two or more riders test positive for coronavirus within a period of seven days. Photograph: Kenzo Tribouillard/Getty/AFP

Teams will only be withdrawn from the Tour de France and subsequent Grand Tours this season if two or more riders test positive for coronavirus within a period of seven days, world governing body the UCI has announced.

Tour organisers ASO had originally issued protocols to teams gathering in Nice this week that they would be sent home if any two riders or staff members returned positive tests within a seven-day period.

However, many felt that such regulations were too harsh and could leave the peloton severely depleted.

On Thursday night, Belgian team Lotto-Soudal confirmed they had sent home four members of staff after two had returned “non-negative” results, with their room-mates also leaving the race.

But the fact the team did not withdraw en masse was seen as tacit confirmation that changes to the rules had indeed been made following days of talks led by the AIGCP, the body which represents the professional teams.

On Friday, the UCI confirmed those revisions, making the protocols less stringent and seeking to address concerns that false positives could see riders and teams needlessly withdrawn.

The new regulations state: “In the case of two or more riders from the same team testing positive for Covid-19 within a period of seven days at a Grand Tour, the UCI will give the event organiser authorisation to announce the withdrawal of the team for health reasons, on the condition, however, that the global medical assessment carried out confirm the positive cases.”

The new regulations said that race organisers must do everything possible to carry out a secondary test before the start of the next stage of the race to try to rule out a false positive, though noted organisers were not liable if this was not possible given the time constraints.

Any individual rider who returns a positive test must be isolated and withdrawn from the race, even if a secondary test has not been completed in time.

Earlier this week, Bora-Hansgrohe withdrew from the Bretagne Classic at the 11th hour after a rider returned a positive test which was later said to be a false positive. Time constraints meant that was not known until it was too late.

UCI president David Lappartient said: “The adjustments made today to the UCI protocol have enabled us to find the right balance between the legitimate concerns of teams faced with the risk of exclusion and the vital preservation of the peloton’s health.

“I call on all cycling’s families, in particular the riders and teams, to continue acting with the same sense of responsibility and united spirit that they have demonstrated since racing resumed.

“All the protective measures respecting the rules such as wearing a mask in the hotels and buses must be scrupulously followed.

“We must give the Tour de France and the 2020 cycling season a chance to carry on to the end, and give our sport, heavily affected by the health crisis, a chance to move forward.”

The Tour de France will begin on Saturday in Nice — which on Thursday was placed on red alert following a rise in coronavirus cases — and is due to conclude in Paris on September 20th.

The Giro d’Italia is slated to begin in Sicily on October 3rd and conclude in Milan on October 25th, while the final Grand Tour of the season, the shortened Vuelta a Espana, is due to begin in Iran on October 20th and finish in Madrid on November 8th.