Ian O'Riordan: Nowhere to play and the price which comes with it 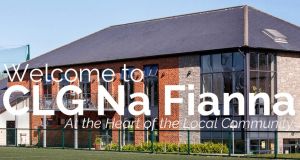 Work on MetroLink involves the requisition of Na Fianna’s front pitch and both all-weather pitches on Mobhi Road, Glasnevin, as well as Home Farm’s soccer pitch

They’re building hundreds of apartments on the grass hockey field that once upon a time belonged to Notre Dame secondary school in Churchtown, Dublin. It was the only properly level playing field between the old Dundrum shopping centre and Milltown Golf Club, and one of the side entrances was always left open.

We would cut through from Weston Park and the new houses built at the back of us at Finsbury Park, and, depending on the time of the year, that field could be staging the World Cup finals or the Olympics. Sometimes twice in the one summer. There was no closing time, and the nuns didn’t seem to mind once we left before dark and kept the noise down.

When I was 16 and getting bored my dad took me and my older brother for a run down to that hockey field, waiting until after dusk so my mates didn’t slag me off. He told us to keep our backs straight and lift our knees a little higher and that we might be okay at it, then one night we told him to run on home and we’d follow him after a few more laps.

There are 9,807 homeless people in Ireland, according to this week’s count, including an additional 703 in the first two months of this year. Of those 3,755 are children, a 47 per cent increase on this time last year, now growing at an average rate of 17 children every day of the week, including today.

All requests by secondary schools to build or upgrade sports halls are being turned down despite the introduction of PE on the Leaving Cert curriculum from this September in a pilot group of 80 schools.

The Department of Education estimates it would cost €450 million to provide or upgrade PE halls across secondary schools, the provision or upgrade of general purpose rooms in primary schools costing another €360 million.

Plans for the new MetroLink in Dublin have been met with some opposition, including Na Fianna GAA club, which currently caters for 125 teams and a membership of around 3,500. Work is due to commence in 2020, and would involve the requisition of Na Fianna’s front pitch and both all-weather pitches on Mobhi Road, Glasnevin, as well as Home Farm’s soccer pitch.

Initial estimates have put the construction cost of the MetroLink at €3 billion, possibly reaching closer to €4 billion by the time of completion. The Shannon-Dublin water pipeline, if that goes ahead, will almost certainly cost more than €1.2 billion.

There is a Minister for Sport asked to explain the €150,000 allocated to a south Dublin fee-paying school with 912 students to help assist with the upgrade of their artificial hockey pitch.

There was €115,000 allocated this week to the Women in Sport programmes for 2018 under the Local Sports Partnership Network. This will fund sport and physical activity programmes for female target groups, including women with a disability, women in disadvantaged communities, older women and teenage girls.

Sexual offences increased by 17 per cent in 2017, and fraud and related offences were up 23 per cent. Drug crime is up 5 per cent, and weapons offences, including gun crime, is up 11 per cent.

Attempts to murder increased 13 per cent last year, kidnapping and related offences were up 8 per cent, and robbery and extortion crimes increased 4.5 per cent.

Burglary and related offences went up 3 per cent, theft and related offences by 8 per cent, public order crimes by 7 per cent. The Central Statistics Office, who released these figures, has warned they are “under reservation” as they’re not satisfied with how crime is being recorded on the Garda’s computerised Pulse database.

There are 4,500 children under the age of 14 living in Dublin 8 in the south inner city, which, with a population of around 50,000 (12,176 residents per sq/km), is the densest in Ireland. The area is currently without a single grass playing pitch, although Dublin City Council has approved plans for one multipurpose pitch as part of the redevelopment of the Teresa’s Gardens Flats complex, due for completion in the next five years.

Kevins GAA hurling and camogie club, founded in 1902 and the oldest continuous hurling club in Dublin, has never had a green space of its own, and by mutual agreement shares the Dophin Park playing fields belonging to Templeogue Synge Street on the Crumlin Road just south of the canal.

As part of an investment plan a section of these playing fields, currently consisting of two adult pitches and three juvenile or “cross” pitches, are being sold for property development purposes.

This week Kevins GAA raised its concerns over that sale, believing any loss of playing place will negatively impact on an already deprived area of the city. Templeogue Synge Street currently field 26 teams in football, while Kevins field 18 teams in hurling and camogie, making for a combined 44 teams.

John Lonergan served for almost a quarter of a century as governor of Mountjoy Prison, until his retirement in 2010, and is now lending his voice to the Kevins video campaign, #NoWhereToPlay

“I have seen first-hand the many young people who ended up in prison,” he says, “addicted to drugs, and was absolutely certain if they had got proper support and proper facilities, and encouragement, in their early years, they would have developed into fully adequate law-abiding positive citizens.

“They were neglected, their lives were lost, denied that fundamental right to grow to their potential. As the Constitution and the Proclamation said, cherish every child equally. Well, that’s a farce, because it doesn’t happen in this part of Dublin.

“I would be saying to the local communities, to all the activists, they need to come together and they need to fight tooth and nail to hold onto this, and to put pressure on the local government. I don’t care what it costs because whatever it will be would be pittance in comparison to what the benefits will be.”

Lonergan is not being cynical when suggesting there are parts of the city and this country which know the price of everything and the value of nothing.