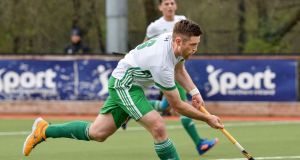 Shane O’Donoghue scored goals against both Wales and France over the weekend in the World League. Photograph: Rowland White/Inpho.

Ireland added Hockey World League Round Two gold on Sunday evening to their all-important advance to the next phase of the competition with a 4-2 shoot-out win over France at Stormont.

The primary objective for the week was achieved on Saturday with a hugely impressive 3-1 win over Wales, ensuring Ireland finished in the top three with goals from Shane O’Donoghue, Ben Walker and Neal Glassey.

That ensured they go forward to World League Round Three, where the 2018 World Cup places will be decided.

And they followed up with the tournament win, putting another feather in the cap of a very young side.

The first-half of the final was a subdued affair with flowing hockey at a premium. France earned a couple of penalty corners that David Harte kept out while his counterpart Arthur Thieffry did likewise, keeping out shots from O’Donoghue and Jonny McKee.

With the half petering out, France won their third corner and Victor Charlet rammed home the opening goal with a low bullet down the middle.

The third quarter provided more of the same before Ireland stirred in a big way in the closing quarter, rattling the French who were reduced to nine men for various indiscretions.

During that time, Ronan Gormley won Ireland’s only corner which O’Donoghue nailed for 1-1 with eight minutes to go. McKee and Lee Cole then both stung the palms of Thieffry in a rousing finale.

In the shootout Conor Harte, Eugene Magee, Cole and McKee all scored while David Harte’s pair of saves ensured victory.

For coach Craig Fulton, it was hugely satisfying in seeing a much-changed squad prevail with eight tournament debutants.

The likes of Glassey, Sean Murray and McKee, indeed, will push very hard to be fixtures in the Ireland team going forward.