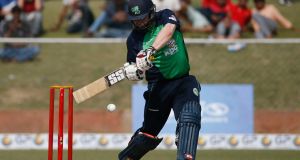 The 26 year-old agonisingly missed out on a deserved century, bowled on 99 by Mohammed Nabi - joining Middlesex colleague Eoin Morgan as the only Irishmen to be dismissed for 99 in ODI’s.

Stirling’s brilliant innings was more sedate than usual, stroking 9 boundaries and clearing the ropes once as his 99 took 114 balls.

He shared stands of 96 with Niall O’Brien (30) and 59 with Andrew Balbirnie after Ireland had been rocked with the early wickets of Ed Joyce and William Porterfield in their pursuit of Afghanistan’s total of 264 for 8.

Whereas Stirling’s dismissal has been the catalyst for Irish middle order collapses in the previous two matches in the series, Balbirnie and Gary Wilson stood firm with a match winning 5th wicket stand.

Balbirnie proceeded to nullify the threat of Ireland’s chief nemesis - leg-spinner Rashid Khan, who went wicketless - employing the sweep to great effect as he thumped 11 fours and 1 six in one of his best displays in the green jersey.

Balbirnie finished unbeaten on 85 from just 74 deliveries, sharing an unbroken 5th wicket partnership of 86 from 65 balls with Gary Wilson, who made a run-a-ball 28 as Ireland won with 9 balls to spare to keep the series alive.

Earlier, Peter Chase (2-55) and Tim Murtagh (2-49) had taken early wickets as Afghanistan had made an unusually stuttering start after winning the toss.

Malahide speedster Chase - who will remain for the remainder of the tour as a replacement for the injured Boyd Rankin - dismissed both openers to give his side a much needed confidence boost.

Murtagh joined in, and with spinners George Dockrell and Andrew McBrine also among the wickets, Ireland seized the early initiative. You got a feeling it was going to be their day when Stuart Thompson deflected a Shenwari drive onto the stumps to remove the dangerous Nabi, who was out of his ground at the non-strikers end.

However, from a faltering 97 for 6, the Afghanistan lower order rallied, as Rashid Khan (56) and Gulbodin Naib (51) led the recovery with a 7th wicket stand of 96.

Shafiqullah then smashed four sixes in an unbeaten 50 from just 28 balls, as he and Dawlat Zadran added 71 from the last 7 overs to get Afghanistan up to 264 - it wasn’t enough though thanks to Stirling and Balbirnie’s brilliance.

Although disappointed at again missing out on a century following his dismissal for 95 on Friday, Stirling was relieved that Ireland had secured the victory.

“Obviously I’m disappointed not to get the century, but the main thing was to get the first win under the belt,” said Stirling. “It was nice to score some runs today and keep my personal form going but the important aspect was the team victory.

“It would have been nice to dismiss Afghanistan for a few less runs after they were struggling at 97 for 6, but we would have taken 260 at the start of the game after losing the toss yet again.”

Stirling was quick to pay tribute to the efforts of Andrew Balbirnie, whom he narrowly pipped to the Man-of-the-Match accolade.

“It was a great knock from Andrew Balbirnie today, to come in and score 80 odd not out was a great achievement and won us the game.”

The teams meet again in the 4th ODI at the same venue on Wednesday (4am GMT), where Ireland will be looking to level the series.