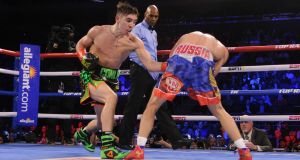 Michael Conlan avenged his controversial 2016 Olympic Games defeat to Vladimir Nikitin with a decisive victory over the Russian at Madison Square Garden on Saturday night.

While the final call was left to the judges, this time around the Belfast native got his due rewards - inflicting a unanimous points decision win over his former amateur foe (100-90, 99-91 and 98-92 ).

The outcome was never in doubt and after being tested early doors, 28-year-old Conlan gradually assumed control as the fight progressed and finally put to bed a saga which shook world amateur boxing.

Conlan cut a focused figure as he approached the ring to his now customary entrance song “Grace,” mixed with James Brown’s “Payback.” The strong Irish contingent played their part too, lighting up the ‘home of boxing,’ with chants of “olé, olé, olé.”

In what was their third showdown - Nikitin also narrowly triumphed back in 2013 as well - it was the 29-year-old Olympic bronze medalist who looked like the man with the most to prove and probably took an underwhelming first round.

Conlan switched to orthodox in the fifth and Nikitin came at him with some heavy combinations up top which had the Irishman on the ropes.

Conlan readjusted and soon began finding his range. Looking more relaxed, he used his jab that bit more to keep the restless Nikitin at bay - who was needlessly sapping his own energy by continously bobbing from side to side.

The highlight of the contest came in the seventh as both fighters locked horns in a pulsating exchange of attritional blows, which drew claps of appreciation from the crowd.

From there though Conlan looked in control and began holding his ground more. Nikitin came at him with some combinations but none appeared to sway Conlan who was far more efficient and economical with his shot selection, probing inside the pocket and letting rip.

The fight was interrupted momentarily in the eight as Conlan caught Nikitin with a low blow but the Falls Road man got back to business with a heavy right hook which left Nikitin unsteady on his feet. Conlan sniffed a finisher with another hard right but the tough Russian was nothing if not game and battled back with some heavy hits of his own.

Into the final quarter and both fighters were now wearing the signs of battle - Conlan with a cut to his right eye while Nikitin’s left began to swell. Conlan was letting fly with left and right hook combinations and dropping downstairs to keep Nikitin guessing - capping off the round with a pin-point short right to Nikitin’s chin.

After all the hype you would be forgiven to think bad blood runs deep between these two competitors - after all, Nikitin sports a nasty head scar from round two of this trilogy. But nothing could be further from the truth.

An embrace before the final bell conveyed their mutual respect - a nonchalant pat on the head from Conlan acknowledging the beef was never personal before bringing the curtain down on the protracted affair.

“It was a lot of pressure,” Conlan admitted afterwards. “ I feel like I had the weight of the world on my shoulders, its nice to get it done.”

“Vladimir is a good guy and I’ve always said that. I needed to right that wrong,” Conlan added.

“Full credit to Nikitin, who fought his heart out. There’s no bad blood. There never was.

Conlan, who stretched his professional undefeated streak to 13 (seven KOs), believes his experience played an important role over an opponent who was only appearing for the fourth time in the elite ranks.

“The thing that did matter was I had gone the distance before and you could see he was kind of blowing towards the end.

“You can see Nikitin can take it, I wobbled him and tried to go for it a bit and maybe I could have got him, but it is what it is.”

“I would have scored it 8-2 maybe. I was letting the hands go myself a small bit but it was comfortable. Maybe I shouldn’t box as comfortable as I do but its so easy so what’s the point in making it hard?

“Its all progression as well because every fight is different, there has to be some difference. We’ve all been saying I need someone to come forward and he didnt actually do it he didn’t really box, even when he was coming forward he wasn’t really fully at it.

“Its all progression moving to bigger things, I really don’t want to be doing this [middle finger] any more - I’m fed up with it.

“Thank God I can get this monkey off my back and just move on.”

Conlan will look forward to 2020 to a world featherweight title fight being earmarked for Belfast on August 1st. But that’s not before a return fight in New York on St Patrick’s Day and some other important business.

“I want a Christmas dinner with ham and all the trimmings!” he beamed.

“I want to enjoy this. Too many people get asked this question and blurt some bull. I love Christmas, we’re going to enjoy New York.”