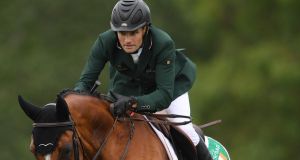 It’s another very busy weekend for equestrian sports with an international event taking place in Cappoquin, Co Waterford while some of Ireland’s senior show jumpers are competing at five-star level in Hickstead and Berlin.

The main focus of attention on Friday was on Hickstead where Ireland, who were drawn first to jump, narrowly failed to repeat last year’s win in the Longines FEI Nations’ Cup of Great Britain which Sweden won for the first time at the west Sussex showgrounds.

A double clear from the Irish pathfinder, Waterford’s Anthony Condon on his own and John Hales’s SFS Aristio, was matched by the anchor leg rider, Limerick native Paul O’Shea riding Tequestrian Farms’ Imerald van’t Voorhof. Captain Brian Cournane (Armik) and Michael Duffy (Mullaghdrin Touch The Stars) had a fence down apiece in both rounds which, after the discard scores, left the team on a two-round total of eight.

Winning a Nations’ Cup competition for the third week in a row, Sweden finished on four faults while Italy took third spot on 10. Britain finished last of the eight competing nations but had to rely on just three riders following the heavy fall at the water in round one of their first-line rider, Amanda Derbyshire, with Roulette BH.

At Samorin in Slovakia, Straffan-based Alex Butler won the four-star 1.50m jump-off class on the 12-year-old Dutch Warmblood gelding Chilli B while, competing at three-star level at Bromont in Canada, Kilkenny’s Michael Hutchinson landed a similar class with the 14-year-old Holstein mare Nektarina B.

Co Meath’s Elizabeth Power, who won both competitions at Tattersalls July Show, is eventing this weekend at the Camphire international horse trials in Co Waterford where, among the seven classes, is a four-star Nations’ Cup competition. Following dressage, Ireland is lying fifth on a penalty score of 95.3 as Sweden leads the eight-strong field on 89.6 followed by Britain (91.5) and Italy (92.4).