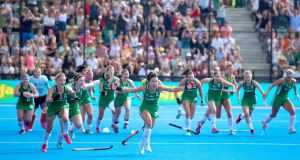 The tone was set from moment one. Katie Mullan’s beaming smile was the first Irish image to project onto the big screen at London’s Lee Valley, the pearly whites in stark contrast to a stony-faced US skipper Melissa Gonzalez at the coin toss.

To a woman, “Ireland’s Call” was greeted in the same way, each rendition bringing 18 sets of grins in unison. And so began one of the craziest Irish sporting stories as the second-lowest ranked group of students, workers and semi-pros stunned a field of full-time opponents.

It culminated in two gloriously tense shoot-outs in the quarter and semi-final, bringing the sport from obscurity on to virtually every front page.

Two days later, they were at it again. This time, Spain were the opponent. Again, McFerran was sublime before Gillian Pinder dodged right and slipped home another indelible memory.

The final proved a damp squib from a competitive perspective. The Netherlands have won every game they have played since 2016 and had no interest in entertaining the Cinderella story.

Nonetheless, the journey captured the imagination with almost 440,000 previously ambivalent viewers flocking to watch the final on RTÉ, the highest sports viewing figures outside of GAA, soccer and rugby since Katie Taylor in 2012.

Where it all came from, perhaps only the players and coaching staff know. The contrast with the body language from their last competitive match a year earlier could not be starker. They slunk off the pitch in Amsterdam after a 7-2 hammering by Spain in the 2017 European Championships, only finding out they avoided relegation a few hours later.

The preparation series was up and down. And yet when they hit the turf in London, they could not put a foot wrong with manager Graham Shaw getting the feel and pitch of each moment just right.

The pressure was off and they were going to savour every moment with smiles on their faces, ones that have scarcely dissipated in the months since.

For the time being, the shoot-outs will play over and over again.

At the turn of 2018, if pressed, local hockey aficionados would have pegged the Irish men as the ones most likely to make an impact at their World Cup. As it was, their recent campaign was one of frustration. A close run 2-1 defeat to the world number one side Australia raised expectations but they could not crack China’s jam-packed defence with every cross slipping just beyond its target. Through grinding teeth, they had to accept a 1-1 draw against the lower-ranked opponent when victory all but assured progression. With their tournament life on the line, England were in no mood to offer a reprieve and Ireland were bounced out, their first time not matching or improving on their pre-tournament ranking in a decade.