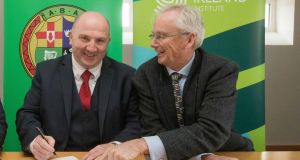 Sport Ireland (SI) has written a strongly worded letter to the Irish Athletic Boxing Association (IABA) outlining a “crisis” that the sport could face in less than five weeks’ time.

In the ongoing fractious relationship between SI and the IABA, the SI through chief executive John Treacy has communicated with IABA chief executive Fergal Carruth, outlining his reservations about the IABA’s lack of implementation of the recommendations of the Rio Review. This could directly effect the funding of the IABA, which is financially supported through SI.

One of the pivotal changes outlined in the Rio Review is that the IABA should undertake a modernisation of the IABA rule book, which Treacy’s letter explains must be completed by the end of June.

There is currently a strong resistance to certain rule book alterations and earlier this year an alternative chairman to Joe Christle – Waterford’s David O’Brien – was approved by five members of the IABA board of directors.

The IABA were in the absurd situation of having two chairmen, each with their own support base.

The IABA board is now split down the middle with a substantial rump objecting to the proposed changes.

Furthermore, in a confrontational move the Central Council, which contains board members, recently rejected Bernard Dunne as Irish team manager for the upcoming European Championships. Dunne is the newly appointed High Performance Director, who began his role in April following on from Billy Walsh.

“The IABA is faced with a crisis arising from recommendations of the Performance Director not being accepted by the Central Council. This undermines the IABA HP Programme and the authority of the new Director [Bernard Dunne]. Furthermore the actions of the Central Council are contrary to the Rio Review (and indeed the London 2012 debrief).

“The IABA is committed to implementing all of the recommendations of the Rio review, so, in turn, requires the new rule book to be operational in 2017.

“Sport Ireland would like to see the new Rule Book in place by June 30 2017. Can you please provide Sport Ireland with an assurance that this timeline will be met.”