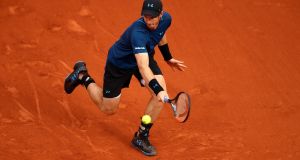 Andy Murray of hits a backhand during the first round match against Andrey Kuznetsov of Russia on day three of the 2017 French Open at Roland Garros. Photo: Clive Brunskill/Getty Images)

The last time Andy Murray stepped on to Court Philippe Chatrier, he had to bow to the excellence of Novak Djokovic in the final that lifted the Serb to the high point of his career. On day three of the 2017 French Open, Murray was the one who bathed in the crowd’s warm embrace when they rose as one to acclaim his quite stunning performance against Andrey Kuznetsov.

It was not perfect but, as John McEnroe remarked after the world No 1 pinned a final forehand into the deuce corner for a 6-4, 4-6, 6-2, 6-0 first-round win over the Russian in just over two-and-a-half hours, “It’s looking a lot more promising that it did a week ago for Murray.”

A week ago, the world No 1 was nursing a cold and feeling sorry for himself after a miserable clay-court lead-up to the second slam of the season. There was hardly a voice in the game who gave him a chance of getting out of the first week here, let alone reaching the final again. Now, he has reignited his season.

His path forward was eased earlier when Alexander Zverev, the 20-year-old Russian who hit Djokovic off the court in two sets to win the Italian Open and was in Murray’s quarter of the draw, lost in four sets to Fernando Verdasco, the Spaniard who blew a two-set lead over Murray in the quarter-finals at Wimbledon when he won the title for the first time in 2013.

Murray might be further aided in his next match if one of the Tour’s most irritable customers, Martin Klizan, is not fully recovered from a leg strain. The 6ft 3in Slovak who is ranked 50 in the world beat Laurent Lokoli in five long, ill-tempered sets on Tuesday, the French wildcard refusing to shake his hand after suggesting he was faking injury.

Klizan, who pulled out of three tournaments before arriving here, harrumphed later: “I don’t want you guys to make a big story out of nothing”. Complaining about having to play doubles soon afterwards (even though not obliged to enter in the first place – and which he subsequently lost), he added: “Great scheduling – especially when I’m coming back from injury. So, it’s very tough now. I’ll do the best [I CAN]to recover and be ready for the next match.”

All of which was good news for Murray on a day when he played his best tennis in at least a month. There was a bit of foot-dragging early on, plenty of chuntering and conversations with his towel but he was definitely back. The ills and the illnesses were forgotten. The serve clicked, the shots flew off the ground like bullets, the angles and distance were calibrated to perfection and he even have smiled once or twice. Ivan Lendl,returned to his box after three months away, remained inscrutable - and probably well pleased. They are back in harness, and dangerous again.

Murray had gestured towards Lendl and his team all afternoon. After two hours it went from a scowl to a fist-pump as he went 2-1 up. The game pivoted on one shot in the second game of the third set that had the crowd cheering wildly. Amid the hard grafting, he hit an impossible lob, struck on the run going full pelt away from the net, which induced a lousy smash and, in a twinkling, the Scot was energised, a break up and on fire. Kuznetsov won just two games after that.

As Murray recalled: “It was a good get. I thought I wouldn’t be able to reach it, but I did. He made a couple of simple errors after that. I got the break, and then obviously didn’t look back from there.”

If there is a reason for his contentment it probably resides off-court.

“Before I became a dad, the first thing I did was just the best thing for my tennis,” said Murray. “Now that changes in terms of my scheduling, in terms of my training. I have spent more time at home than maybe I would have done in the past.

“I speak with my wife a lot about [THE SCHEDULE], about which events she’s going to potentially come along to, making sure that we’re not apart for more than three or four weeks at a time. I have noticed especially in the last few months, the older that she gets, the more things she’s doing, the more she’s changing - this is my daughter, not my wife. So I don’t want to miss anything. The more we can split up the trips, the better.”

Meanwhile, Romanian third seed Simona Halep moved smoothly into the second round of the women’s singles with a 6-2 6-3 win over Slovakia’s Jana Cepelova, showing no ill effects from the ankle ligament she tore less than two weeks ago.

Having come close to pulling out of the tournament due the injury, sustained in a losing cause in the Italian Open final, the Romanian faced a potentially tricky first-round outing against a player she lost to the last time they met, at Wimbledon in 2015.

But tapping into the rich vein of form on clay that also took her to the Madrid Open title in mid-May, Halep’s groundstrokes were too fast and too accurate for Cepelova, who made 23 forced and 29 unforced errors.

“Today was a great day for me. I really played well,” she said courtside. Halep faces Germany’s Tatjana Maria in the second round.

1 England v Ireland preview: Ireland’s revival to face its sternest test
2 French new wave stay on course for Grand Slam
3 Devin Toner: it ‘means the world’ to be back in the Ireland side
4 Matt Williams: Ireland will need to step up on Wales display to prevail at Twickers
5 ‘Manchester United are lucky to have you’: Klopp responds to Donegal schoolboy’s letter
Real news has value SUBSCRIBE